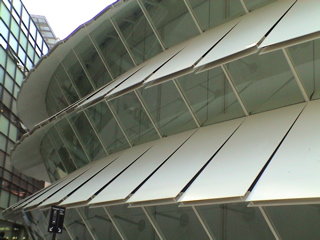 Quai Branly – Getting there

I took the Metro from Edgar Quinet to Bir Hakeim – otherwise go to Pont d’Alma. Quai Branly is located on the Left Bank of the Seine River. If you’ve visited the Louvre or Musee d’Orsay, you could walk from the Musee d’Orsay (heading west) but don’t try this if you’ve already spent several hours in another museum!

To give you a clearer picture of where the museum is located, if you standing directly under the Eiffel Tower and you’re facing the Seine River, the museum will be about 100 meters to your right if you turn right on Rue de l’Universite which runs parallel with Quai Branly. I just walked along the Quai Branly which is the best way to get a good view of the Jean Nouvel façade.

First a little about the Jean Nouvel exterior. This latest experiment seems to be a an expansion on his earlier project at the Musee de Cartier on Boulevard Raspail. There also, he tried to incorporate the natural landscape with glass and gridwork to create a world where one never really knows what is inside, what’s outside, and what is sheer illusion. I like his evolution from the severe lines of the Musee du Monde Arabe to a project that does not seem to be quite as afraid of a making a few curves. His blocks of color are fun and the garden filled with sprouting ferns seem to sweep visitors into its vortex. I know little about architecture as an art, but I know what feels welcoming – and this garden entrance is a place where one can just as easily linger on the outside or find ones way effortlessly to the front door.

On the first Sunday of the month which is free admission I decided to ignore the warning of a 45 minute wait in line. At 4:30 pm as it turned out, the line moved much faster which allowed me an hour to get a good overall view of the museum layout, and pick out some specific areas to visit.

First a word about the floor to ceiling circular ‘totem’ of stacked musical instruments. This is the famous display that earned the criticism of the Musee de l”Homme’s director due to its lack of climate control.

My reaction was moreso a gut feeling of indignation. The sheer quantity of musical instruments stacked in this way reminded me of piled up bones. Undoubtedly, this wasn’t the museum organizer’s intent. But something about seeing this mountain of musical instruments which will most likely never be played made me a little sad.

From there you take walk along a circular ramp – which seemed a little a re-run of the Caen Memorial – not to mention good old Terminal 1 at Charles de Gaulle airport. Yeah, I know there’s this thing about circles, being in France. It’s a circular thinking part of the world. But I can’t help thinking that this long circular walk is leading me to some sort of Disney World Magic Mountain, especially with the images flashing on the walls and on the ground. Is ‘hokey’ the word that pops to mind?

Well, finally, when I do end up ‘propulsed’ or regurgitated into the first level which is Oceanic arts and sculpture, I can forget all about the unpromising entrance. There are plenty of nooks and crannies with organic flow, rock formation type dividers, and plenty of places to sit in niches beside computer screens that provide more info on the exhibits. The lighting and warm colors – purple and red create the feel of a high-brow night club rather than a stark or utilitarian gallery.

Although there were still quite a number of people in the museum, at no time did I feel claustrophobic. On the other hand, the labyrinthine (into the forest) layout might make some people feel somewhat nervous. If you keep in mind that the way out – is by walking downhill rather than uphill, you’ll be fine. There are also plenty of markers for emergency exits. What I like very much about this museum is the smooth transitions from Oceanic to African to Amerindian and South American sections. Nothing is really completely separate if you just keep walking, you’ll see everything. The only ‘separate’ part would be the special exhibitions which are separated by stairs that lead up to a mezzanine, but even that separate section is visible from the main hall. There were also museum guides stationed at central parts of the museum to answer the essential questions like ‘Where are the toilets?”
I thought I would be spending most of my time viewing the African exhibits, but the Oceanic exhibits sidetracked me and then I wanted to see what Paris would have to say about the Native-American nations – or as they’re called here Amerindians. Here is what I learned.

In Amerindian cultures, the men are more often the figurative artists while the women design in abstracts. Because the men are relating the past whereas the women are the creative force – and in some cases foretelling the future. One example of this was a Sioux warrior’s tunic designed with images of horses. Next to a cloth designed of completely geometric design was displayed.

Who comes to the museum on a free admission, first Sunday of the month?

Well, I was curious about this especially after reading the review in the IHT which spent most of the article talking about how this was really a museum that would bring in a lot of non-Western visitors. My first observation was that out of all the people waiting in line, only ONE person was wearing a baseball cap. I thought it was important to look at what the baseball cap said, it said, HABITAT.
This is just to tell you that it looked to me like this was a very Parisian crowd.
There were some tourists also – but none of us (except one) was wearing a baseball cap.
I would give this museum a rating of 9 out of 10.
Bravo for deciding to put the Musee Quai Branly right next to the Eiffel Tower.