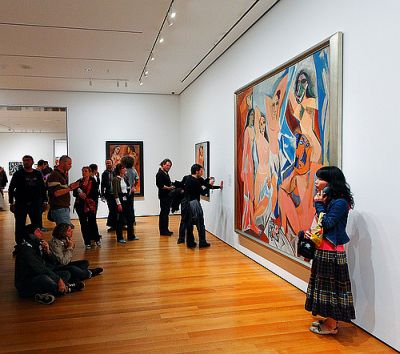 While the Louvre is certainly an overwhelmingly impressive museum full of some of the most treasured and famous works of art in the world, I never quite understood why so many visitors to Paris feel compelled to try to cram seeing this museum into an already overpacked itinerary. It’s just not a museum that can be enjoyed in a few hours, nor will you be all that impressed with the tiny Mona Lisa shielded behind a thick wall of glass and crowded with a hoard of tourists snapping photos. Trust me.

Don’t get me wrong, I have a deep appreciation for the Louvre, I just think it’s more the kind of museum you have to dedicate a significant amount of time and energy to if you are going to enjoy it, which most tourists trying to see the city in a few short days just don’t have time to do. So, instead of feeling overwhelmed and lost in the Louvre, I always recommend skipping out on the monster museum and enjoying the countless other amazing pieces of artwork held in other Paris museums, the Musee Picasso being one of them (I also love the Musee d’Orsay and Rodin Museum).

[Editor’s Note: Thanks to Adam from Invisible Paris who tipped us off, the Musee Picasso closed in August 2009 and will remain closed until 2012]

The Musee Picasso is housed in the beautiful Hôtel Salé, located on rue de Thorigny in the Marais. The building itself is something to see and is considered to be one of the finest historic houses located in the Marais. The mansion was built between 1656 and 1659 for Pierre Aubert de Fontenay, who became rich as a tax farmer collecting the salt tax (hence the name of the house, which translates as “salted”).

History of the Museum

In 1968, the French passed a law that permitted heirs to pay inheritance taxes with works of art instead of money (inheritance taxes in France are steep), as long as the art were considered an important contribution to the French cultural heritage (oh, les francais).

This law promoted Picasso’s heirs to donate many works of art from Picasso’s private collection—including work from all of his different periods and using all different techniques. Today, the Musee Picasso contains just over 3500 different works of art by Picasso including drawings, ceramics and painting (this even includes a drawing done by Picasso when he was only 14 years old called Girl with Bare Feet).

Works in the Museum

In addition to the mass amount of work by Picasso, the museum also contains a collection of works from Picasso’s personal collection, which include the works of Cezanne, Degas, Rousseau, Seurat, Matisse and others.

While many of the works of art in the museum are stunning and interesting, what I like most about the Musee Picasso are the displays and effort to include relevant accompanying information with the artwork. For example, cartoons which mocked or caricatured Picasso’s work id displayed with his work from the 1950s. Other items on display include photographs, manuscripts, newspaper clippings and photographs to provide additional contextual information.

The museum also follows more or less a chronological sequence, which allows you to watch the evolution of Picasso as an artist right before your own eyes.

The museum is also free the 1st Sunday of every month