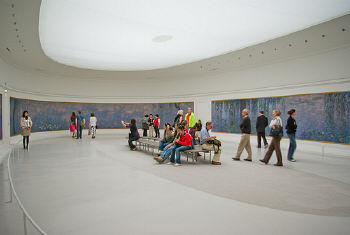 If you heard that a particular museum was chosen by the great impressionist painter Claude Monet as the permanent home for two large rooms lined with some of his largest paintings, and that this same museum today houses many other famous works by impressionist and post-impressionist painters, you’d probably want to visit, right? That’s the right response – because the Musee de l’Orangerie in Paris is absolutely worth the trip.

In the 1920s, France arranged for two oval-shaped rooms to be built at the Musee de l’Orangerie to house eight big murals of Monet’s “Water Lilies” series which he had said he would donate to the French state. Monet even provided the specifications for the rooms that should hold the paintings, and they were opened in 1927 a few months after the great artist died. Thus began the Musee de l’Orangerie. 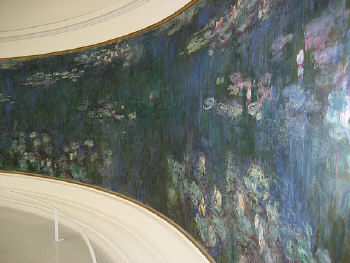 Over the years that followed, the museum continued to acquire more works to display and eventually an expansion of the building was required. This expansion involved putting a second story over the first, which ended up covering the old skylights and made the original floor rather dark. The natural light which had once helped light the Monet paintings was gone, so in 1999 the decision was made to renovate the lower floor to let in natural light once again.

In 2000, the museum was closed for the renovations, which were supposed to be completed for a 2004 re-opening. There were difficulties along the way, however, which delayed the re-opening until 2006. But the result is now that the rooms housing the original Monet paintings is on the upper floor, bathed by a diffused natural light (just as Monet had specified), and the museum has a new underground level with education facilities (among other things).

While the huge Monet paintings are arguably the main reasons to visit the Musee de l’Orangerie, once you’re there you’ll be pleased to know the museum is a delight for any art lover. You’ll find works by Pablo Picasso, Paul Cezanne, Henri Matisse, Renoir, and Amadeo Modigliani. 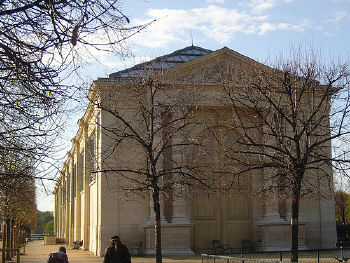 As a potentially interesting side-note, the building that is now the Musee de l’Orangerie was originally what was known as an “orangery” for the Tuileries Palace near the Place de la Concorde. An “orangery” was somewhat like a greenhouse and many wealthy families had them near their palaces throughout Europe; the name stems from the time when citrus trees would be kept under cover during the winter in order to protect the delicate plants. Orangery buildings eventually became a symbol of status, in addition to a functioning greenhouse, and the Musee de l’Orangerie was just such a symbol at one point.

Today, we’re lucky that the great Claude Monet had the idea to donate some paintings to the French state and the government had the good sense to accept the donation. While the Musee de l’Orangerie might not be your first museum stop in Paris, if you like Monet and you can’t make it to his gardens at Giverny (heck, even if you can) there’s nothing better than to sit in the center of one of those oval rooms and surround yourself with the master’s work.

Good to Know: First Sunday of each month there is free admission for all
There’s an audioguide in English (and other languages) for €5 (€3 reduced rate)

More Information: The museum website is in French only