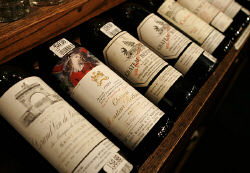 French cuisine and French wines are world-famous, there’s no denying it. And while most of us are quite content to order the house red in a Parisian cafe, knowing it’ll still be better than most bottles you could buy back home, some people have richer tastes. If you’re one of those people, and you’ve got a bank account to match, then here are the most expensive French wines in the world.
When you’re talking about the world’s most expensive French wines, you have to first make the distinction between individual and specific bottles sold at auctions, and those which are available via retail sales to normal folks (well, at least if “normal” means you’ve got a thousand bucks to drop on a bottle of wine). I’ll cover the ones sold at auction first, but if you’re saving your pennies for a special bottle of wine – the kind to brag about for the rest of your life – keep reading, because I’ll cover the most expensive French wines mere mortals (albeit rich mortals) can actually buy at the end of this post.

The single most expensive bottle of French wine on record was sold at a Christie’s auction in 1985 for around $160,000 – it was a 1787 Château Lafite, purchased by Christopher Forbes, and the bottle he bought reportedly came from Thomas Jefferson’s private collection. The sad ending to this story is that, after the wine was purchased, Forbes had it put on display and the conditions under which it was displayed caused the cork to fall out of the bottle. It lost its value completely and had to be tossed out with the garbage. I’d like to think that’s apt punishment for putting wine on display rather than just drinking it, no matter how expensive it is.
For what it’s worth, that Château Lafite holds the record for not only the most expensive bottle of French wine, but the most expensive bottle of wine ever sold – period – according to those Guinness record-keeping folks.
Another bottle associated with Jefferson is listed as the most expensive white wine ever sold, and it’s another French wine – it’s a 1787 Sauternes from Château Yquem, and it was purchased by an unknown American buyer from London’s Antique Wine Company in 2006 for about $100,000. The wine, although historic, is probably undrinkable, so it, too, will likely go on display somewhere. 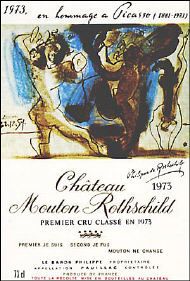 Behind the record-setting bottles from Jefferson’s collection, the 1945 vintage of Mouton Rothschild is listed as the most expensive vintage. In September 2006, six magnum bottles were sold at an auction for $345,000, and 12 regular-sized bottles were sold at $290,000 – putting the value of a single 1945 Château Mouton Rothschild bottle of wine at roughly $28,750. That’s even more than the most expensive bottle of champagne ever sold, which went for (again, at an auction) more than $17,600.
What’s interesting to me about these wines which were sold at auctions for thousands upon thousands of dollars is that the wineries that produced them are still around today – but their names are not the ones at the top of the list of the most expensive French wines you can actually buy. The winery producing the most expensive French wine today actually depends on which list you’re looking at, because the top two tend to run neck in neck and can swap places depending on the year. 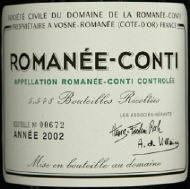 Most reports indicate that Domaine de la Romanée-Conti produces the most expensive wines today, with single bottles fetching $3,000 or more. Romanée-Conti is based in the Burgundy region and produces both red and white wine, although it’s the red wines that command such high prices. A bottle of Romanée-Conti red from the 1978 vintage supposedly even sold for $24,000. They only produce 400-500 bottles per year, so while this is technically one of those wines that would be within reach of some big spenders, you’ll still be hard-pressed to find one that’s available for sale. The good news is that if you happen to find one, you could actually drink it – as opposed to those 200+ year-old bottles mentioned above. 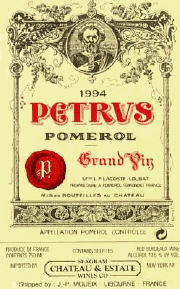 Coming in a close second on most lists behind Romanée-Conti are the wines from Château Pétrus, a Bordeaux winery producing wines that will cost at least $1,000 per bottle (and more often come with a $1,500+ price tag). Compared to the other wines I’ve already covered, this one seems to be a downright bargain!
Pétrus is the only wine on this list my tongue has even gotten close to, and I have my French cousin to thank for that. No, he didn’t buy me a bottle. What he did do is buy a beautiful French farmhouse to retire in just outside St. Emilion, not far from the Pétrus vineyard. Several years ago when I visited, he took me on a driving tour of the many famous vineyards in the Bordeaux region, and Pétrus was one of them – despite the fact that there is no sign anywhere indicating that it’s actually Pétrus, and there’s certainly no tasting room. I was there in early September, before that year’s harvest, but after they’d gone through the rows of vines to selectively clip a few bunches of grapes here and there (thus concentrating the flavor in the remaining grapes even more). We picked up a couple of the discarded bunches of grapes from the ground and brought them back to my cousin’s house to snack on. They definitely tasted like wine, but I’m not sure they tasted like $1,500 wine…
For more information:
https://www.forbes.com/2006/02/10/expensive-wine-bordeaux-cx_po_0210autofacescan08.html
https://www.forbes.com/2003/11/19/cx_np_1119feat.html
https://www.terroir-france.com/wine-faq/most-expensive.htm
https://www.askmen.com/toys/top_10/52_top_10_list.html
https://most-expensive.net/wine-bottle
https://en.wikipedia.org/wiki/Domaine_de_la_Roman%C3%A9e-Conti
https://en.wikipedia.org/wiki/Ch%C3%A2teau_P%C3%A9trus
https://en.wikipedia.org/wiki/Ch%C3%A2teau_Lafite_Rothschild
https://en.wikipedia.org/wiki/Château_Mouton_Rothschild