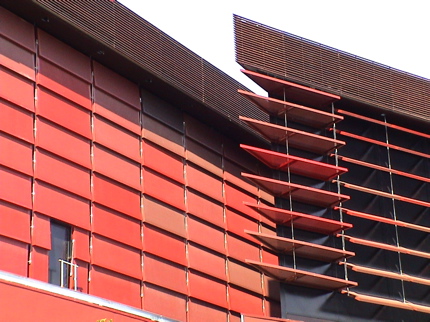 This is my second visit to Quai Branly in the past month. If you read my first two posts re Quai Branly, you know that I’m a big fan – but a second visit accompanied by Chris and Kate (who has lived in Palau and currently is living in Saipan) brought to mind some ‘gentle criticisms’ that hopefully the museum directors will resolve.
1.Given the fact that the Republic of Palau’s president was photographed with President Jacques Chirac at Quai Branly, it’s ironic that the only item we could find on display from the Caroline Islands was a wooden kava bowl. Certainly in the collection of 300,000 items, there must be something a little bit more flashy. Some items that come to mind would be the traditional ‘bai’ or men’s meeting house. Okay, maybe that’s too big. How about a ‘storyboard’? These are wood-carved wood planks that relate the mythology of Palau’s creation. Storyboards are particularly important because it was an art revived in the 1920s and 1930s.
2. Yap money. Yap money appeared in the form of huge circular stones (appearing like wheels) which were transferred by boat from islands like Yap to Palau. The captain of the boat would be chained to the yap money. He had good reason to make sure he reached his destination safely.
3. In fact, the Micronesian islands are not well represented at Quai Branly (and also Eastern Africa). Of course, as one conferencier explained, with 300,000 items in the collection, they can’t show everything, but this is what I found a little perplexing. When I went up to the information desk, the ticket clerks didn’t really know where Micronesia was. (Of course the conferencier did know the Caroline Islands). Wouldn’t you think one of the prerequisites for working at Quai Branly would be to know where Micronesia and Polynesia are located?
Maybe this seems like nit-picking, but after visiting the Saipan’s museum and learning about the unusual ‘latte’ architecture on Saipan island in the Mariannas, it seems that Micronesia has gotten short shrift in the art world.
What do you think?