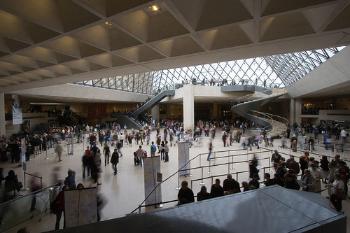 The French government has just given young people one more reason to visit Paris – starting April 4, 2009, all of the French national museums and monuments will stop charging admission fees to anyone under 25. That’s right, kids, that €9 you were budgeting to get into the Louvre Museum can, after April 4, be spent on another drink at the hostel bar or a souvenir Eiffel Tower beret instead.

French President Nicolas Sarkozy made the announcement about the new admission fee waiver in his New Year’s address, although he didn’t offer any details about it. It does appear that the policy is a permanent change rather than a temporary one, which is great news for young budget travelers in Paris.

Now, I am getting some conflicting reports about this story – some news outlets say that the President’s speech wiped out the entry fee for all under-25 visitors to French museums, while others say that the fee is only going to be eliminated for French under 25s. If you have any definitive information on this, please let me know by leaving a comment below.

>> Thanks to iKangaroo’s Chris Carriero, who’s in Paris right now and went directly to the Paris tourism office as well as the Louvre to confirm, I can now report that the “free under 26” rule is going to be for EU citizens only. So, it’s not just French citizens, but it’s not everyone, either. Thanks for checking, Chris!

Whatever the case with the admission fee being waived, another part of Sarkozy’s speech alluded to the creation of a new national history museum in Paris in what he called a “symbolic” place in the city.