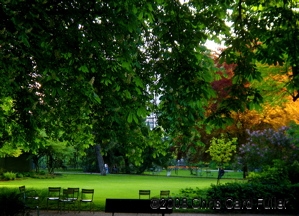 If you haven’t visited the Luxembourg Gardens in autumn, there’s no better season for photography – the light is exquisite and the flowers reflect the slanted rays of autumn light.

Sadly, the woman who commissioned these gardens never had a real opportunity to enjoy the locale. She was Marie de Medici. Eventually, the queen was banished from Paris by her son Louis XIII. Although only a small portion of the original grounds exist – the park has plenty of room for Left Bank residents who love to while away sunny afternoons on the metal chairs surrounding the central reflecting pond or find a peaceful corner along one of the winding paths.

Unlike the Tuileries Gardens on the Right Bank (directly across from the Louvre), the Luxembourg Garden offers more of a blend between classical french and romantic english -style design – the central portion maintains the balance and geometrics associated with a jardin a la francaise, but as you move farther away from the center, the gardens morph into a maze of paths that can lead either to tennis courts, a children’s playground and nearby marionette theater, bee hives, or the Medici fountain (tucked in a corner not far from the Senate building).

This is really a great garden for kids as well as adults – with pony rides and little cars (in the western corner of the park) The carrousel dates from the Napoleonic era. It’s no surprise that the Luxembourg Gardens features as one of the gardens visited by little Madeline and her other boarding school mates in the Madeline children’s book series by Ludwig Bemelmans. 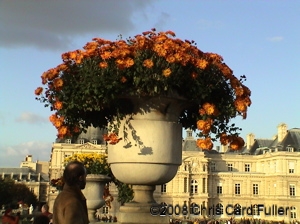 While Parisians and tourists alike enjoy an afternoon stroll or watching their kids play in the sandbox, France’s senators tend to lawmaking within the hallowed halls of the Senat (which originally was Marie de Medici’s palace designed to resemble the Pitti Palace in Florence.). 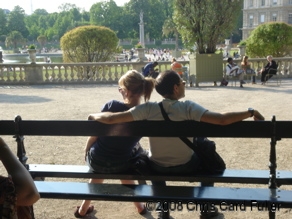 You will also find that the Luxembourg Gardens is a favorite meeting place for students who take a break between classes to either study or simply enjoy a tete-a tete with friends. The Sorbonne as well as several other branches of the Paris university system are within short walking distance. 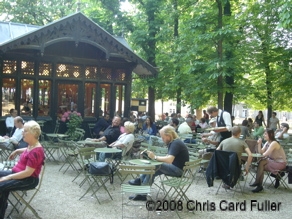 The two turn-of-the-century park cafes have inspired many an artist to paint the leisurely expresso drinkers – and the nearby bandstand has welcomed musicians from all corners of the world to perform during the summer months.

Although other parks around Paris may be considered to be more ‘ordered’ – or more ‘royal’ – or more ‘off the beaten track’, you may find yourself returning again and again to the Luxembourg Gardens simply because it’s a very comfortable and welcoming place to spend a quiet moment in Paris.

Getting to Luxembourg Gardens

A pleasant walk can be taken from the Vavin Metro stop along Rue Vavin which will bring you to the corner of the park.
The RER Luxembourg station is the closest Metro stop.
Some of the major streets bordering Luxembourg Gardens are Rue Vaugirard and Blvd. Saint Michel . 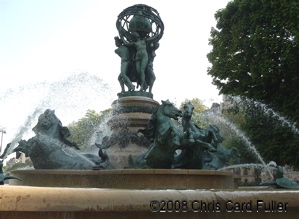 The (RER stop Port Royal) Blvd. Montparnasse/Blvd. Pont Royal intersection will bring you into the two allees at the very opposite end of the park from the Senate. I would definitely recommend starting from this entrance in order to admire Carpeaux’s fountain (which will hopefully be operating if it’s a sunny day).