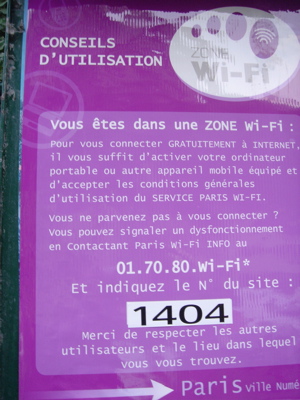 In Paris, you can get bits and pieces of good connections, but don’t always expect to land the Full Monty. As you may recall in past posts, the City of Paris has had the infinite wisdom and benevolence of spirit to come up with the concept Free Wi-Fi access in some of its parks, public libraries and local town halls. Shame on San Francisco for not following Paris and Reykjavik, Iceland’s lead in creating an umbrella of hot spots. San Francisco, how could you, of all cities, fall prey to the likes of commercial pressure from Earthlink? Shame on you!

Meanwhile, back in Paris, looking for Mr. Wifibar, has introduced me to two libraries (Bibliotheque Vandamme and Bibliotheque Georges Brassens) in the 14th arrondissement, each with its own brand of idiosyncracies. To get to the Bibliotheque/Discotheque Vandamme at 80 Avenue du Maine, exit the Metro: Gaite. On the west side of Avenue du Maine, you’ll be standing directly in front of the Centre Commerciale Gaite. a little to the right of the big ‘G’ which designates the Centre Gaite, you’ll find yourself standing in the middle of a triangular esplanade adorned with half a dozen pawlonia trees. (The wood of the pawlonia trees is used in some countries to construct coffins). Be advised that the library doesn’t normally open before 12 pm – so save yourself the trouble of being an early bird and opting for the park (Jardin Atlantique) located above Gare Montparnasse (where I ‘m currently typing until my fingers freeze off!). Atlantique was the perfect name for this park.

Alert viewers will spot the sign that says Bibliotheque/Discotheque Van Damme pointing to concrete steps descending into the seven circles of the Inferno. To be perfectly honest, for years, I assumed that this was a ‘Discotheque’ for dancing. And seeing as it was never open at night, I assumed that the ‘Discotheque’ had closed and reopened as the ‘Red Light'(aka Tropicana) just down the street, closer to Gare Montparnasse.

The good news is that Bibliotheque/Discotheque Van Damme is open, alive and well, and totally free. If you present your passport and provide a local address, you can also borrow books from the library – in addition to using the City of Paris’s free wifi access.

The bad news is that you CANNOT use the library’s electrical outlet. Yes, I’m serious. I was granted one-time, exceptional use of the electrical outlet to recharge my laptop. As the library attendant explained, “the wi-fi is free – the electricity isn’t.” Although this seemed to be an edict verging on the absurd, I didn’t know at this specific point in time that the Grenelle d’Environnement round table talks on global warming, protection of natural resources and the energy crisis were very much on the minds of the French republic and the City of Paris. Mea culpa. If the lights of Eiffel Tower and Elysee can be turned off for a five minute salute to Mother Earth, I should be able to live with the fact that I will only be able to blog for as long as the Apple battery survives.

Is there life after batteries run dry? If you have any question about this, check out the Korean masterpiece film “The Way Home” and you will see that in some cases, life only begins when all the batteries die. Looking for a connection in Paris? You’ve already found it. Parislogue.