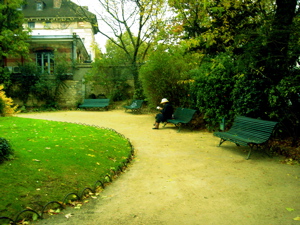 Claude Nicolas LEDOUX park
Photo by Chris Card Fuller ©2007
Libraries are fine places for wifi connections if you plan on sitting quietly in a corner – and your battery is fully charged – and the library is open. I assumed there HAD to be a wi-fi cafe in the neighborhood where I might be able to chat over SKYPE without being banished.

Think again. The Indiana Cafe on Avenue du Maine seemed to be a likely spot for Wifi – it wasn’t. Finally I resorted to the France Telecom yellow pages which listed all of one cybercafe in the neighborhood: Au Rendez-vous Denfert, 2 Avenue General LeClerc, Metro: Denfert Rochereau.

The cafe looked promising with a little sign posted in the window saying that Wifi was available. When you access the Wifi provider, you are asked to sign up for Wifi service – for a fee. So, rather than wrestle with wifi, I decided to do the right thing under the circumstances – get a beer.

And this is how Looking for Mr. Wifi can be truly enriching experience. For the first time since I’ve been popping in and out of cafes, I have finally found a cafe where I can drink a beer for under 3 Euros. It may be small, but it’s beer. And at 2 Euros 40 centimes, how can you complain?

Here’s how you do it. Make your way to the bar and ask the barman for a ‘galopin’. We’re talking 25 centiliters of draft beer. I know for serious beer drinkers, this is comparable to getting splashed when the beer steins (or chopes as we call them here) are being slapped onto the table) but for 2.40 Euros, I can learn how to nurse this galopin while I’m trying to figure out where will be my next attempt for free wifi.

In case I haven’t mentioned, the temperature is dropping in Paris. The autumnal metal grey skies have afforded only a few glimmers of sunlight in the last two days – and although the cold isn’t yet ‘cold to the bone’, it is definitely not conducive to long strolls in the park.

Fortunately, the park Claude Nicolas LEDOUX located at the Denfert Rochereau Metro stop is not so big. It isn’t a famous park and apart from a couple in the process of recreating Rodin’s famous sculpture – The Kiss- I’m the only other park bench occupant.

To keep out the sound of street traffic from this famous circle where the Belfort lion reigns supreme and to keep the rattling bones of the millions of skeletons lying beneath this sedate park forever resting in peace, or at least in pieces, I will try to quietly tuck my head close enough to the computer microphone to place a Skype phone call back to Portland.

There is something innately absurd about using Skype in a Paris park. But if it weren’t for ‘Looking for Mr. Wifi, I wouldn’t be here at this particular moment. In fact, I may have never ventured into this small enclave – which I’ve always associated with street bums.

Likewise, the Jardin Atlantique, located directly above the Gare Montparnasse is a free wi-fi garden. Go there at this time of year and you might feel as if you’ve entered a peculiar time warp, a futuristic park of sharp angles interspersed with dangling willow.
The wooden planks twist between monoliths of glass and concrete.

A few birds find refuge here and the gurgle of angular fountains speak only of Zen austerity. It takes a little longer to find your Paris Wi-fi access here. You need to scroll past regine, freephonie, ali, detritus, the list goes on.

My fingers (as I’ve mentioned in yesterday’s post) will not allow me to overstay my visit to this park. No three or four hours stuck in front of a computer screen. Not in Paris.
I gallop toward the glass elevator that descends to street level of Gare Monparnasse.
An employee at the station holds the door for her colleagues.
“Only for you,” she says, “Anyone else and I would have tossed them over the top.”
Well, welcome to Paris.