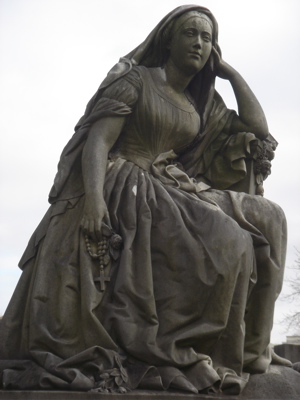 “The point is that there is no point (to life).”

So says one of the tomb inscriptions at the Montparnasse Cemetery where I’m taking a stroll on this unseasonably warm February day in Paris. And although the Pere Lachaise Cemetery may be more well known for its list of celebrity graves in Paris (ranging from Jim Morrison of the Doors to Edith Piaf, France’s recently revived chanteuse thanks to “La Vie en Rose”), the Montparnasse Cemetery has its ample share of celebrities squeezed into a space smack in the middle of the 14th arrondissement.

>> Jump right to the visitor information for Montparnasse Cemetery so you can wander through the graves yourself.

I like this cemetery for many reasons. The former owner of our apartment, Mme de Preneuf, used to take her children here for walks (the cemetery is very close to our apartment building). Maybe because I received a letter for her today, the idea struck me to go to a place that she enjoyed visiting. Sadly, this lively, energetic woman, mother of four children (including one newly born at the time of her death) didn’t make it to age 50. She was struck down by cancer. It always seems terribly unfair when a man or woman in prime condition, surrounded by young kids – who need them so desperately for those early years – falls to the grim reaper’s sickle. But, as Dad always used to say, “Who ever said life was fair?”

So, I’m walking along one of the alleys of the Montparnasse cemetery beneath a tree inhabited by crows. One caws his warning as I approach – and I cross my fingers that “It is not for me – this fellow crows.” 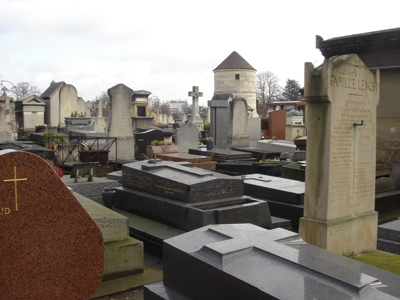 On a particularly mossy stone, a little sign signals that this ‘concession in perpetuity’ is up for grabs. The lesson here is this – unless your tombstone has been declared a historic landmark by the city of Paris, you had better ensure that you leave someone behind to look after your final resting place. Like any other piece of real estate in Paris, if you don’t continue to pay for it – you lose it.

That’s why, at the front gate of the cemetery, on February 13th of 2008, a long list of names and their ‘perpetual concessions’ were posted. If no one appears to pay and maintain these gravesites, they get resold. But don’t worry, the celebrities buried at Montparnasse Cemetery have names that are just as sought-after in death as they were in life. In other words, you needn’t worry about whether the graves of the famous people buried at Montparnasse are going to be resold.

Some of the famous French people buried at Montparnasse are: 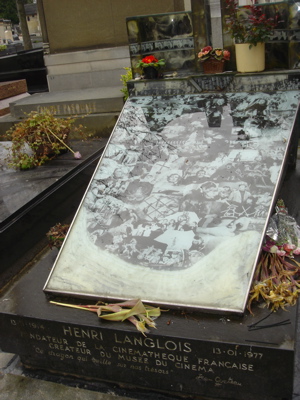 Montparnasse is the cemetery of poets, artists, musicians, philosophers, mathemeticians, historians and other luminaries including Henri Langlois and his partner Mary Meerson. I usually stop off to say ‘hello’ at Langlois’s gravemarker, which was designed in the shape of the Palais du Chaillot. Even though La Cinematheque has since been moved to its new home near Bercy Village, Chaillot and the Cinematheque retain their curious link in the shape of a gravemarker.

Other residents of this cemetery have the benefit of having been memorialized by talented sculptors – including one 19th century madame who looks like she is about ready to stand up from her podium and walk you to the front gate.

I also took advice from another sculptor whose chiseled words were:
“My work is my prayer.”
Something to think about. 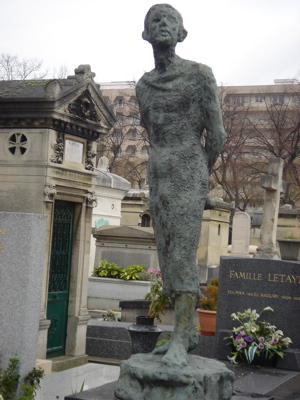 Location: Montparnasse Cemetery is at 3 Boulevard Edgar Quinet
How to Get There: Metro Stop: Edgar Quinet (this is the closest Metro stop, but there is also an entrance within walking distance from the Gaite Metro stop as well)
Open Hours: Monday-Friday, 8am-5:30pm (winter) and 8am-6pm (summer); Saturday, 8:30am-5:30pm; Sunday & holidays, 9am-5:30pm
Admission: Free for visitors

If you decide to visit the Montparnasse cemetery, you can ask for ‘un plan‘ at the front gate which lists the names of many of its famous graves. Although Montparnasse isn’t as big as Pere Lachaise, some of the statuary exudes an aura of 19th century calm in stark contrast to the looming Tour Montparnasse which never ceases to make its presence known. 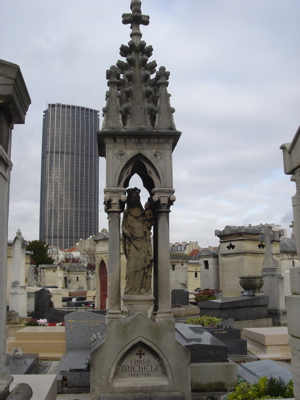 Don’t miss the old windmill at the middle of the cemetery. It no longer has its ‘arms’ so it looks more like a tower than a windmill, but it remains as a reminder that at one time Montparnasse was not more than a country village located on the outskirts of Paris proper, where hungry artists earned the money they needed to buy paints or sculpting material by carving tombstones. The nearby quarries provided them ample stone.

Take the simple things you find in life and transform them into a work of beauty through sheer force of imagination.

Now and then, pause to remember all those who have passed through Paris before you – even those with moss-covered graves. 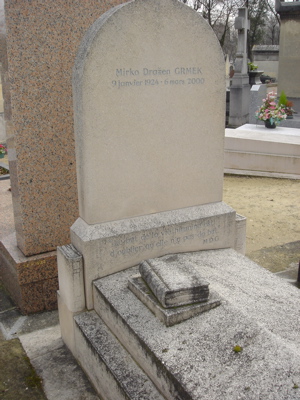