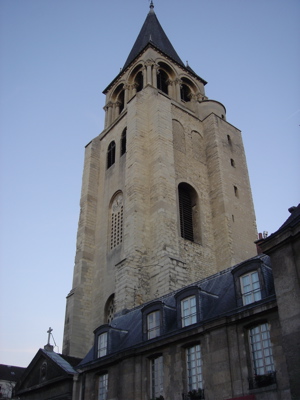 Saturdays in November can be the ideal time to walk around Left Bank neighborhoods, St. Germain-des-Pres, in particular. Here you can catch the pulse of the Parisian cultural and fashion world – or simply enjoy a stroll window-shopping as the beginning of Christmas shopping brings out many Parisians.
If you’ve followed my advice and booked an inexpensive hotel in Montparnasse, fortify yourself with a breakfast of croissants, cafe au lait and orange juice before you venture too far from your Montparnasse hotel.

Saturdays, the Edgar Quinet market is in full swing. Here you’ll find not only plenty of fruits, vegetables, and cheese, but also inexpensive handbags and scarves which make nice souvenirs.

In Montparnasse, or if you’re looking for a quick carbo-loading, you can stop in at Viagio Restaurant www.viagio-restaurant.com for substantial portion of pasta at 4.90 to 5.70 Euros served in Chinese take-out style cartons.
Viagio, 4 Place du 18 Juin 1949 6eme Metro: Montparnasse (at the corner of Rue de Rennes and Blvd. Montparnasse).

If you’re looking for books, CDs, mobile phones, or electronics, be sure to stop in FNAC bookstore on your left side. Here is where you can also buy theater, concert, and museum show tickets in advance. On a Saturday afternoon, you may find the throngs of shoppers overwhelming, in which case, pick a street running parallel to Rue de Rennes. You’l most likely run into St. Sulpice church enroute to St. Germain-des-Pres Church.

St. Sulpice which which as received recent notoriety because of its role in the Da Vinci code is currently being stored (one tower and part of its facade). However you can still go inside and admire the Delacroix painting in the chapel to the immediate right of the main entrance.

I like to take this route which branches off from Rue de Rennes at Rue du Four because a warren of streets runs from St. Sulpice across to Blvd. St. Germain. You’ll find plenty of inviting restaurants in these streets such as at Cafe Six, 19 Rue des Canettes.

Here is where we stumbled into Cafe Six, a cozy Basque tapas bar where you can either quaff a beer or enjoy a sangria with real fruit. The tapas are excellent. Fried calamaris for example. For smokers, get there before January 1st, 2008 and you will be able to enjoy your vice in plenty of good company. The wait staff here are accommodating – and I’d go so far as to say that the female wait staff deserve some sort of award a being the most efficient and at the same time maybe the most gorgeous women on the Left Bank. If you’ve been to some of the ‘trendy’ spots in town, you’ve seen the vacant look of the wait staff chosen for their ‘model’ taille, rather than their abilities to bring food and drink to your table.

This is NOT the case at the Cafe Six!
The best time to get to arrive at St. Germain-des-Pres Church is early evening. You want to be here around the l’heure d’aperatif when the cafes start to hop. Don’t waste your time going into Les Deux Magots or Brasserie Lipp. Stroll around the square. Explore the streets behind the church (Rue de l’Abbaye, for example).

Pay your respects to Picasso’s statue dedicated to Apollinaire in the church courtyard, and take some time to admire Paris’s oldest church.

Not much remains of its original construction dating from 990 to 1021 AD. A few columns here and there (some which have been duplicated with the originals removed to the Musee Cluny), but simply knowing that this church once housed relics of the Cross, that this was the site where fierce Norsemen battled against the clergy for control of this fortified abbey, makes one think of those days when Paris and its outlying regions had to defend themselves without respite.

Nowadays, the only worst intrusions are the site of the ugly Montparnasse tower which looms in the distance like an unwelcome reminder of an architecture that has no regard for its surroundings. Much as I detest the Montparnasse tower, it does serve a useful purpose. We have no difficulty returning back to our Montparnasse lodging. You won’t get lost on this walk if you manage to stay on Rue de Rennes: you’ll constantly see the Montparnasse tower straight ahead of you. 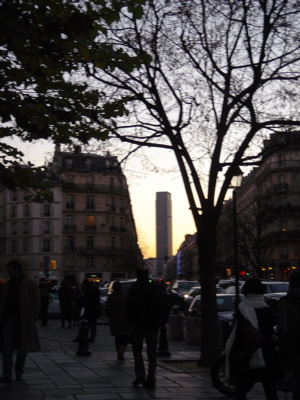