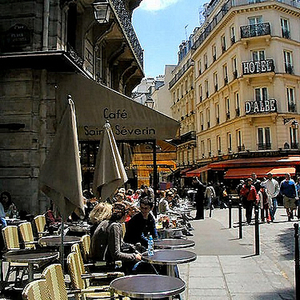 The truth is that almost no tourist in Paris stays only on one side of the Seine River during a visit. You’ll go back and forth, perhaps multiple times a day, so you might think that which side of the river you stay on doesn’t matter. And to some people it may not. But consider that there may be days when you don’t feel like making the effort to hop on the Paris Metro to eat at that restaurant across town that you’ve heard so much about. Think about how every morning you’re going to walk out of your hostel door and be on the hunt for breakfast.

If the neighborhood you’re staying in has a selection of nice-enough cafes, restaurants, markets, and shops – not to mention a healthy dose of charm – then sticking close to “home” won’t feel like you’re giving up too much. So read up on the differences between the Left Bank and Right Bank in Paris, and see whether any of these Left Bank hostels is on the side of the river you think you’ll prefer.

The map below shows the Left Bank hostels in Paris, plus a few attractions on the Left Bank for reference. You can either click on the different hostel icons on the map to find out more about each one, or you can scroll down underneath the map to read a short description about each hostel. They’re listed in alphabetical order.

Hostels on the Left Bank in Paris

Aloha Hostel
1 rue Borromee – 75015 Paris
The Aloha Hostel is in Paris’ 15th arrondissement, in the general area of the Eiffel Tower and Les Invalides (where Napoleon is buried). There are two Metro stops within a few blocks of the hostel, and several more nearby.

Unlike some hostels, at Aloha the biggest room only has 4 beds. Breakfast is free in the downstairs kitchen, which is also available for guest use. Sheets and towels can be rented on-site, or you can bring your own. Some potential drawbacks are that there’s a curfew (2am), a lockout period (11am-5pm), they only take cash, and there’s only 1 key per room – you leave the key at the reception desk if you’re the last to leave and pick it up at reception if you’re the first to arrive.
>> Book Aloha Hostel in Paris

FIAP Jean Monnet Hostel
30 rue Cabanis – 75014 Paris
The FIAP Jean Monnet is a monster of a hostel, with some 480 beds in total. But in addition to being a gigantic building with what seems like a zillion beds, it also houses a language school (so the “dorm-style” rooms are actually kind of the dorms). The hostel is about 20 minutes from sights like the Eiffel Tower and Louvre via the Metro.

Guests at FIAP Jean Monnet get breakfast, towels, and linens included with the price of the bed, and rooms vary in size from singles to twin rooms to quads. All rooms have their own shower and toilet, so although you’ll be sharing the bathroom with your roommates you won’t have to trek down the hall in the middle of the night.
>> Book FIAP Jean Monnet Hostel in Paris

Oops Hostel
50 Avenue des Gobelins – 75013 Paris
Don’t let the name fool you – Oops Hostel is no mistake. It’s located in the 13th arrondissement not far from the Latin Quarter and very close to two different Metro stations for your convenience. The hostel opened in 2007, so it’s still relatively new on the scene.

Among the freebies you can expect at Oops Hostel are breakfast, internet access, and WiFi. Linens are also included in the price of the bed, although you’ll have to either rent towels or bring your own. There’s a lockout from 11am-4pm for cleaning, but no curfew. The hostel only accepts cash payment upon arrival.
>> Book Oops Hostel in Paris

The 3 Ducks Hostel
6 Place Etienne Pernet – 75015 Paris
While the word “hostel” no longer remains synonymous with the word “party,” there are still some hostels where it’s more about the social atmosphere and cheap drinks than it is about a place to stay. The 3 Ducks Hostel in Paris is one of those places. It’s in the 15th arrondissement not far from the Eiffel Tower, and it’s one of the best party hostels in Paris.

Party hostels aren’t typically known for their cleanliness, and The 3 Ducks is no exception. It routinely gets marked down in the “clean” and “comfortable” categories, but the super-cheap drinks at the on-site bar usually make up for that. There’s no curfew or lockout period, and internet access & breakfast are free, but linens, towels, and WiFi are all things you’ll need to pay for (or, in the case of linens & towels, bring your own).
>> Book The 3 Ducks Hostel in Paris

The fact that the Latin Quarter is known for its nightlife is going to make you glad there’s no curfew at Young & Happy Hostel. There is, however, a lockout period during the middle of the day for cleaning. Breakfast is included with the price of the bed, but internet access will cost you – and you’ll either need to bring your own linens and towels or rent them at the hostel.
>> Book Young & Happy Hostel in Paris