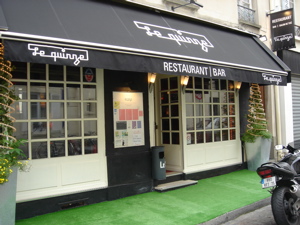 Described as a ‘neo-traditional’ restaurant, Le Quinze transcends categorization. ‘Branché’ i.e. ‘hip’ minus the attitude, very democratic, the clientele ranges from the super- chic, the super belle, to the adorable couple from the Savoy region who wander in for some wine degustation by the glass.

You may also recall from a past post that Rue Daguere’s ‘plus beau mec du quartier’ bartends. Stop in and say ‘hello’ to Luther.

But even more important -this is the restaurant/bar for those of you searching for a place to hang your hat – up until 2 am, (every day except Mondays) It’s not every semi-residential neighborhood that has late night restaurants. The Rue Daguerre neighborhood in Paris’s 14th arrondissement is just one market street, part of which is blocked off for pedestrian traffic on market days. By night, there’s a number restaurants with a similar neighborliness (such as Plan B mentioned in a past post). Perhaps because Rue Daguerre isn’t frequented by tourists in the evening, it’s retained this attribute.

Le Quinze has passed one of the most amazing tests: Christopher’s ambiance rating.

Christopher (my husband) has a total revulsion for trendiness. Case in point. Several seasons past, I suggested we try out a new ‘designer’s cafe’ in St. Germain-des-Pres. In spite of being seated in the choice ‘banquette’, and in spite of the attentive service, he writhed through the entire meal. He didn’t appreciate the miniscule lettering of the menus (the smaller the typeface on Parisian menus, the higher the price). He was also unimpressed by the ‘laid-back’ look of the wait staff. He wasn’t happy about the trendy cafe’s high prices for Italian wines (some of which could be found at Monoprix for much less)). i.e. Why pay a high price for a mediocre wine simply for the ‘privilege’ of warming the seats in a money churning enterprise?

Such is not the case at Le Quinze. Here you can try some of the ‘Star’s wines’ i.e. Gerard Depardieu, Francis Ford Coppola’s wines, or a robust Cote de Rhone at 4 Euros a glass. Including Californian wines on the menu was a pretty gutsy move, I thought (not to mention the House Hamburger/with, or without bacon).

“That was my son’s idea,” the proprietor Jean Louis Cavalon explained.

Each night, you can try the 25 Euro menu which includes a starter, a main course and a dessert. Add a four Euro glass of wine to that and you can enjoy an evening in Paris for two for 58 Euros. No need to hurry through your meal at a restaurant that stays open till 2 am. The perfect place for jet-lag induced insomnia? Absolutely. The wait-staff is eager to practice their English with you.

If you decide to dine at Le Quinze the attitude like the menu is ‘relaxed traditional’. Here’s a great place to observe relaxed Parisian fashion at its very best – unpretentious and totally cool. Leave your running shoes back at the hotel and slip into that delicious lacey ‘debardeur’ (halter top) and jeans you picked up during the day.

By the way, the menu which passed Christopher’s ‘ambiance test’ with flying colors is written in BIG BLACK BOLD typeface. The daily special is written out on a chalkboard. Last night’s specials included a ‘foie gras de canard’ appetizer, red lentil puree soup, and the main course was a sweet-and-sour pork dish with prunes. Catherine Ter-Sarkissian admits the carmelized pork dish was her slight digression from more traditional dishes – and it was a success.

We skipped dessert this time, but the mint tea was ‘tip-top’. Can’t wait to go back again to Le Quinze.

What really makes us feel at home is owner Jean-Louis Cavalon’s warm reception. He likes to mix. Likewise, bartender Luther keeps the ambiance chaleureuse and throws in a few words of English now and then to make Anglophone visitors feel welcome.

Super cool, super ‘sympa’! If you’re looking for a neighborhood place for late nights, this is it!