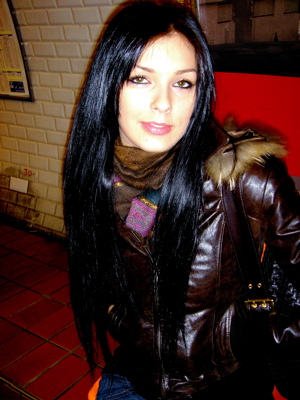 Photo by Chris Card Fuller © 2008
Parislogue’s Parisgirl continues her search for the most beautiful Parisians in response to Amsterdamlogue’s challenge.
Clearly, Parisians are not only beautiful but charming as well. Laura is a Parisian who lives in the Left Bank’s 5th arrondissement – you may recognize this as the student district and the famous Latin Quarter which was once inhabited by such luminaries as Abelard and his beloved Heloise – who both ended up their lives in monasteries and convents for the sole error of having fallen madly in love with one another.
Laura was kind enough to allow me to take her photo as she waited for a Metro. As a fellow expat resident, Mark, mentioned, you’ll find Paris’s most beautiful people in the Metro. (All those steps make for a good workout – one of the reasons Parisians remain so trim).
If you plan on visiting the student quarter, you’ll find plenty of inexpensive Greek, French, and Cous-cous restaurants in the twisting, turning streets branching off from Boulevard St. Michel. The fountains at Boulevard St. Michel were the epicenter of the 1968 student demonstrations. St. Andre-des-Arts, encircled with cafes is in the thick of the Latin Quarter. A stone’s throw from here stands the venerable Sorbonne – University of Paris and the Musee du Moyen Age (free admission until June 30th) where you can see some of the original statuary from Notre Dame Cathedral as well as the famed unicorn tapestries.
And if you are extremely polite, you may meet the most charming Parisians in some of the 5eme arrondissement’s student cafes.