La Defense: Casino on the horizon? 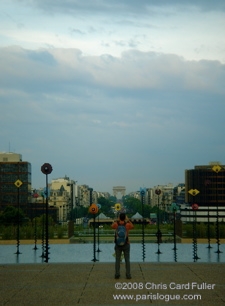 After the sudden intrusion of one skyscraper on the Parisian landscape, La Tour Montparnasse, city planners responded by passing a law that banished all future skyscrapers to the burbs. Henceforth, La Defense located in Paris’s westerly satellite regions – Puteaux, Courbevoie and Nanterres ( Hauts-de-Seine -92) – emerged like a science fiction movie set. 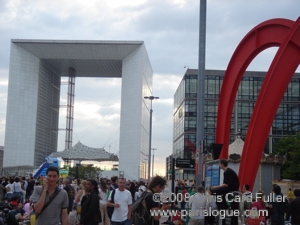 Get your first peak at La Defense from the top of the Arc de Triomphe.
Once you’ve feasted your eyes on the easterly view towards Paris proper (that’s Haussmann’s Paris – broad boulevards punctuated by the Egyptian obelisk, the I.M. Pei pyramid, the Louvre – and if your eyes are super-human – straight through to the July Column at Place de la Bastille, turn your attentions westward – and toward the future!. 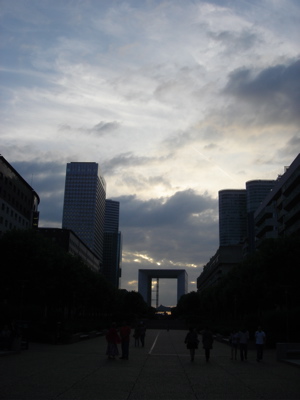 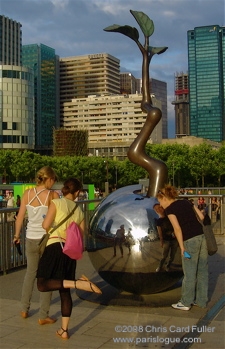 Today, September 19,’08, La Defense may finally receive its tourist site credentials – which have been long overdue. Don’t be surprised if the next new addition to the future tourist landmark will be a casino.

Deeming La Defense as a tourist site has definite advantages. First, and foremost, shopping malls will be allowed to remain open on Sundays. For anyone who’s visited La Defense’s windswept esplanade on a Sunday in February, you’ll know that this deserted landscape deserves a better fate. More nightlife for business travelers such as a casino is bound to bring more glamor to La Defense and might just make this Paris’s answer to Las Vegas.

In the meantime, the best time to visit La Defense is on a bright, sunny week day. Its esplanade serves as an FREE outdoor gallery for some fun sculpture and fountains. Three of the sixty garden sculptures include works by Joan Miro and Alexander Calder and Cesar’s ‘Pouce’ or ‘Thumb’. This is a car-free zone and there’s also a recreation area for small kids in the center of the esplanade. La Defense’s esplanade is also referred to as the ‘parvis’. 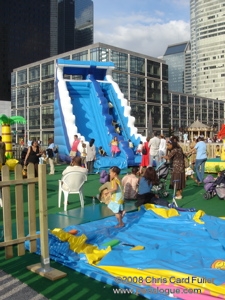 We especially enjoyed visiting the fountains during the Herbie Hancock concert this past summer – where a number of kids didn’t hesitate to hop in to the fountains to cool off. 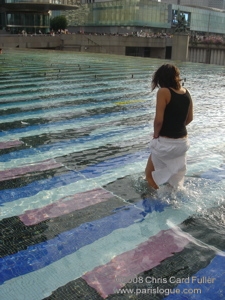 I’m not a big McDonalds fan, but then again, this McDonalds is a pretty good example of how the old signature orange plastic has given way to organically-correct soft greens and piped-in techno. It’s worth it, just to stop in for a pause, a little free wi-fi access and any technical stops – or ‘Le Big Mac’ for culture shock victims.

If you want to feast your eyes on a behemoth of skyscrapers perched at dizzying angles, or broad bands of color, reaching ever upward, this is the place to bring your camera and choose the best angle. The next big building adventures will include Jean Nouvel’s eagerly awaited Signal Tower, slated for construction between now and 2015. Meanwhile there are plenty of structures to photograph.
Another project in the planning stages is Californian architect Thom Mayne’s Lighthouse or La Phare.
La Phare (The Lighthouse) Mayne will construct a 68 floor, 300 meter building at the same time that the Signal is being built. Do you think Mayne and Nouvel will compare building plans over burgers chez MacDo? 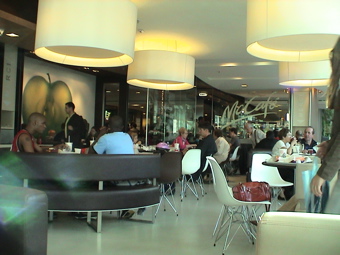 Also on the horizon, the Tour Generali will be the tallest building in the European Union at 318 meters. currently the Total building at 610 ft or 187 meters and 48 floors is the tallest La Defense skyscraper. 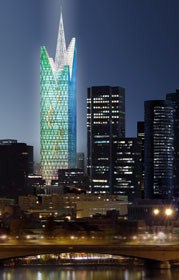 The Grand Arch, part of former president Francois Mitterand’s ‘great projects’ was inaugurated in 1989. It was built by Danish architect Johann Otto von Spreckelsen. The Grand Arch is 110 feet or 361 meters. You can take the Grand Arch’s high speed elevators to its top for a head-on view of the Arc de Triomphe and the ‘spine of Paris’.

Currently the Total skyscraper is the tallest but bigger and more ‘eco-friendly’ neighbors are on the way. The newly arrived 180 meter Granite Building isSociete General’s latest addition to the steel and glass landscape (One has to wonder who’s money built this one!). It was designed by Christian de Portzamparc. 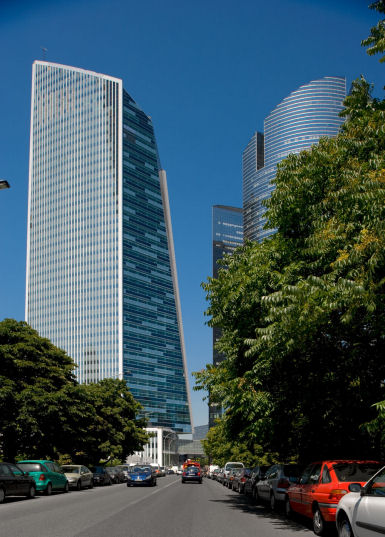 My favorite, to date, is I.M. Pei’s PB6 or the Tour EDF. So that’s where all our electric bill money has gone. 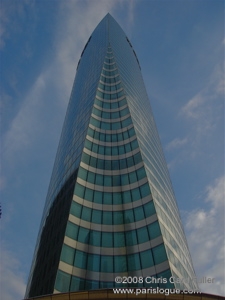 Getting to La Defense:

The easiest way to reach La Defense is to take the #1 Metro Line
Chateau Vincennes-La Defense, Direction La Defense. La Defense is the last stop and you’ll arrive just beneath the Grand Arch. If you get off at the second-to-last stop Esplanade de la Defense, plan on taking a LONG walk to get to the Grand Arch. l’Esplanade is only useful if you plan on strolling along the sculpture gardens on a very pleasant day. Otherwise, the walk will be quite chilly.

Until September 30, 2008, the Cite de L’Architecture, Palais du Chaillot, Metro: Trocadero will have a preview of all the plans for this future-minded city complex.
Closed Tuesdays. Open 11 am to 7 pm, Thursdays until 9 pm.

>> Is going to the top of the Grand Arch worth the view?