La Blue Car: The Electric car that runs for 250 km! 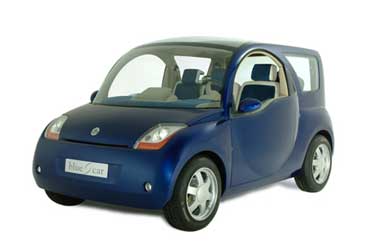 It will keep going for 250 km before you have to recharge. It would cost you about 1 Euro to drive 100 km and you could buy this sweet car for about 15,000 Euros by 2009 IF Bollore group finds a partner.
If you’ve been reading Parislogue past articles regarding French cars, you’ll know that the electric car, ‘Jamais Contente’ appeared in France in the 19th century (1899). When it comes to putting electric cars on the road, it seems fitting that the first fully powered electric cars should appear on Paris streets.
President Sarkozy has been talking about encouraging renewable energy in France – here’s your chance.
La Blue Car has resolved many of the issues that made electric cars seem unfeasible in the past.
It uses a Lithium-Metal Polymere battery which is five times lighter than the comparable lead battery. There’s no liquid and the battery is totally recyclable with a shelf life of ten years. It takes six hours to completely recharge the battery but two hours will recharge the battery by 50 percent.
It would be the ideal car for Paris drivers. Designed by Philippe Guedon (Renault Espace designer), the car has enough seating for the occasional five people (with three seats in the front!). This car is really cute. It might remind you of the Twingo Renault.
Guillaume Zambaux, in his story for Le Parisien, last November, described La Blue Car as ‘Nerveuse et Silencieuse’
‘Nerveuse’ is the French way of calling a car ‘feisty’. It supposedly is capable of beating out some sportier -looking cars in the first 100 meters. Will we ever get a chance to see La Blue Car strut its stuff on the ‘Champs’? I’m eager to see France’s politicians get behind this car and show that France is going to be first to put clean cars on its streets.