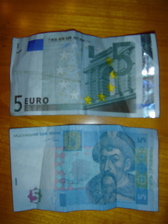 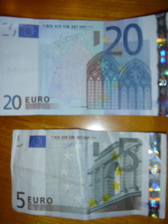 If you take a look at these pictures of 5 Euro and 20 Euro banknotes, it’s pretty easy to see which is the imposter in this line-up, but you’d be surprised when you’re getting change at the market, you might be distracted. It could be a long time, before you pull the Five Euro note out of your wallet and say, “Hey, this looks kind of weird.”
Believe me. I know. It happened to me just this week. Remember that the Euro note will have the European union insignia (the same as the European Union flag (with circle of gold stars). You’ll see this in the upper left hand corner. On the right side, you’ll find the silver holygraph band (the silver magnetic band and the EU flag are only found on one side of the bill.
It probably won’t happen to you, but sometimes counterfeit bills show up. It only happened to me a long time ago. The bank won’t reimburse you for counterfeit bills. He who gets stuck with a counterfeit bill – gets stuck with it. So, keep alert. Always count your change. And if you do get stuck, just shrug your shoulders and say, “C’est la vie.”
BTW, does anybody know where this renegade bill comes from? If you get one of these, you can always take it to Paris’s central bank, Banque de France. They will know. I’m saving mine for my next trip to wherever this bill originates.