President Sarkozy wants school kids to remember the 11,000 French-Jewish school kids who were deported during World War II. But rather than talk about those lost lives in dry historic terms, he wants each school kid to be responsible for keeping alive the memory of each individual child that was deported. According to today’s Le Parisien, the responses range from eagerness to participate in the project to objections about the way this project was presented to teachers, parents and teachers’ unions. One historian who is against the project states that ’emotions’ are ephemeral – that teaching history cannot be based on emotion. “Yes, we need to teach the history of Shoa victims but like all memoires, speaking not only of the dead – but also of the living.”
One student complained that students never learned much about World War II. History goes as far as Napoleon.
This was not the case with the school group that I saw ten days ago at the Musee de la Resistance which is located just above the Montparnasse train station. A museum tour guide took the time to talk to students about the tragedy of war and the loss of lives – of kids just like themselves.
Likewise, it’s not uncommon to see many French school groups visiting the American Cemetery in Normandy. 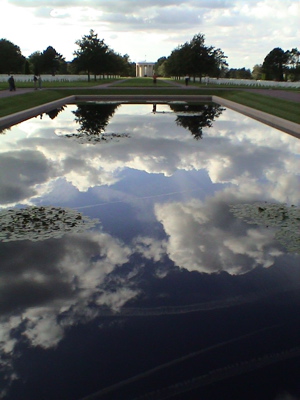 American Cemetery
Photo by Chris Card Fuller ©2008
Mémorial du Marechal Leclerc de Hauteclocque et de la Liberation de Paris et Musée Jean Moulin
Jardin Atlantique (just above the Montparnasse train station) Metro: Montparnasse
Closed Mondays.
Free admission.
The Deportation Monument “dedicated to the living memory of the 200,000 French deportees sleeping in the night and the fog, exterminated in the Nazi concentration camps” is located at the very tip of Ile de la Cite directly behind Notre Dame Cathedral. As you walk from Cite island to Ile St. Louis, you’ll see the Deportation Monument to your right just before crossing the bridge. You must walk down the steps – and if you are at all claustrophic, be forewarned. 200,000 embedded cristals represent the lives of those that perished. When I went to this monument, I did not run into any school groups several years ago. The experience is numbing. It is easy to miss this monument if you don’t know it’s there, but once you’ve been there, you will never forget it.