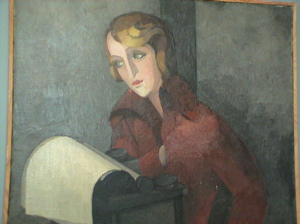 My worst travel assignment in Paris was delivering a ‘Dear Jeanne Letter’ from an American guy who was breaking up with his girlfriend in Paris to marry a woman in California. Never accept the request to deliver this kind of letter. The day is engraved in my memory. 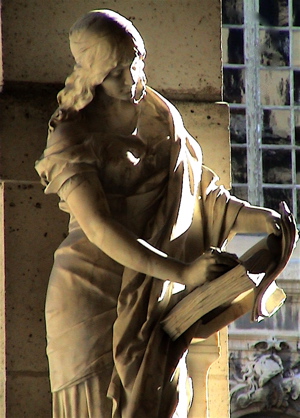 I arranged to meet the former girlfriend at Trocadero in front of what used to be the Cinematheque Francaise (now the Cite de L’architecture) tucked away in a corner of the Palais du Chaillot. She would have to follow the winding path that circles around the palais leading to a leafy sanctuary. From here, she would see the Eiffel Tower shrouded in a skirt of plane trees, its curious iron geometry hovering on the horizon.
Nature can embellish architecture. Not much can be done about words on paper.
I waited. She was late. I think she must have already guessed that a stranger bringing a letter from her beloved could be bringing nothing but bad news.
I recognized her even though we had never met – her soft lines, the curve of her hips – she was definitely American – the short, sensible haircut – dark eyes. He had not left her because of her eyes, or because of her gentle voice, but then I knew the other woman in California, and I knew that few could resist her charms.
We greeted one another in French – even though we were both American and with as little small talk as possible – we wanted it to be guillotine quick. I handed her the letter. Rather than wait to be alone, she valiantly opened it, read the letter, folded it back into its envelope, put the envelope in her purse.
I don’t know what words I tried to conjure to soften the blow, but as in all deaths, there are never any words, just mockery and fraud.
So, it was with this experience under my belt that I went to the Sophie Calle exhibit at the National Library Richelieu (ending June 15th 2008).
When this French visual artist/writer/film director received a goodbye e-mail from her lover, Mister X, rather than tuck the letter in her purse and walk away to cry in solitude, she shared the letter with 120 other women – and then with the world.
One thing you won’t learn in French etiquette schools is how to break up with your lover, but common sense says that sending an e-mail is probably not the smartest thing – even in this case when Mr. X wrote such a lengthy e-mail (in fact, there are e-mail etiquette guides that say, ‘keep it short’).
Was this guy too cheap to buy a stamp? Is there any right way to break up? Back in high school, my first boyfriend had the right idea. He started off by saying, “J. likes you and would like to date you – oh, and by the way ….”
(This may work in high school – I’m not sure how well it works later in life).
Instead Mister X wrote his long e-mail missive to Madame Calle, explaining how he no longer felt that he could carry on their monogamous relationship and tidily finished up this e-mail jumble with:
“Take care of yourself.”
Calle did just that. She requested each of her friends to interpret the ‘letter’. If you go to the exhibit which lasts until June 15th, 2008, you will find the reading room of this traditional library (this is the old Richelieu Bibliotheque Nationale in the 2eme, not the new one) has been transformed into a multi-media exhibit.
Calle could not have chosen a better venue for her show. There are plenty of nooks and crannies where you can quietly witness hundreds of women reading the letter – recreating an event that will happen at least once in almost every man and woman’s life: Getting jilted. In this case, even France’s president can sincerely feel your pain. In 2007, his former wife, Cecilia Sarkozy left her husband Nicolas Sarkozy, and eventually remarried. She didn’t have to tell him to take care of himself.
The Calle exhibit is one of the most unusual shows I’ve ever attended in Paris, and as one fellow blogger suggested at Ivy Paris News, don’t bother bringing your boyfriend. This is definitely a ‘girl thing’. But I’d be equally interested in seeing a similar show from the man’s point of view.
However, I also agree that sharing a letter – or an e-mail with the world begs the question. Is it an act of passive aggression? Is it an act of vengeance?
I felt sadness when I looked at the photographs of dozens of different women reading ‘the letter’, but I also felt the discomfort of observing a private moment for which I had no reason to be there.
Very much like I felt at Trocadero when a softspoken American said her last ‘goodbye’ to the man she loved. This is a moment where three or more is a crowd.
Bibliotheque Nationale – Richelieu
Rue Richelieu
Metro: Bourse
75002
About the painting. This 1922 painting, Le Dactylo (The Typist) by Andre Mare can be seen at the Bernay Municipal museum in Bernay, Normandy. It is not associated with the Sophie Calle exhibit.