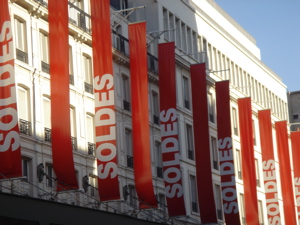 Winter sales in Paris, or Soldes d’Hiver begin this year on Wednesday, January 7th. Normally, the five-week winter sales start on the second Wednesday in January. However, this year, the government has decided to set the dates a week early for various reasons. A major factor is the sluggish economy and a real concern that many retailers will need to discount much earlier – in fact, many already have done so for pre-Christmas sales.

Other neighboring countries start their traditional winter sale right after New Year’s. Unlike the U.S. the annual winter and summer sales dates are determined by the French government. In past years, the decision has been determined by local prefectures. However, this year, the dates will be set by the federal government.

You don’t have to wait until January to take advantage of winter sales though. As mentioned in a recent post, prices have already been discounted in some shops. So, perhaps, the January 7th date is arbitrary. No matter what time of year you choose to visit Paris, you can take advantage of discount prices on clothing at discounted brand stores (referred to as ‘stock’) in the Alesia district (14th arrondissement).

Metro: Alesia or Metro: Plaisance
Walk along Rue Alesia from Avenue du Maine/ or General Leclerc up to Raymond Losserand.

Another useful guidebook to discount shops is Paris Pas Cher. If you do decide to visit Paris specifically during sale season, you might want to wait until the end of the five-week winter sales to take advantage of the final discounts.

My advice, rather than wait for department store sales (which is a study of shopping frenzy – and not very pleasant) is to take advantage of the smaller boutiques such as Nina Kendosa(Rue Mouffetarde) where you can find reasonably priced French designs year-round.