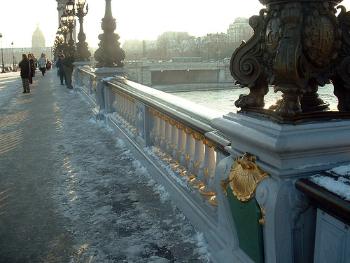 Paris in January is a different place from the Paris you know in the spring, summer or fall. She is in deep hibernation. There are several reasons for this.

The ‘winter solstice’ festivities have officially ended as of early January, which means that Christmas, New Years and ‘little Christmas’ (the Epiphany feast day) are over. Many Paris shops, not to mention the entire town of Issy les Moulineaux, tend to stubbornly keep their Christmas lights flickering at least until the 9th (which is great if you happen to arrive in Paris too late for Christmas or New Years, as they make you feel as if you haven’t missed out completely on the festivities).

Weather in Paris in January
As you might expect, January in Paris is cold. The average temperature ranges from 35-45F (2-6C), so you’ll definitely want to pack your sweaters and scarves (or plan to pick up a few at the January sales!). It doesn’t tend to rain or snow quite as much in January as it does in December, which means the skies can often be clear – but that also means it can get even colder because of the wind. In short, if you’ve ever wondered why the airfare to Paris and hotel room prices drop considerably in January, you’ll understand immediately when you’re trying to brave the below-zero wind chill factor while still admiring the view from your canal cruise. In other words, a trip to Paris in January should be more about holing up inside a charming cafe with a good conversationalist or a good book, or haunting the forgotten corners of every single one of the museums in Paris.

Events in Paris in January
In early January, provided you’ve got some Parisian friends who invite you in for dinner, you can also still enjoy the celebration of the galette du roi (the King’s cake) a delicious almond paste filled cake where one ‘lucky’ person in your group gets to break a tooth or a filling on the plastic ‘feve’ which allows him the chance to be king for a day – and choose his very own queen. Kids of all ages seem to love this ritual – although one year, Nicolas (the youngest in our group at the age of 23) didn’t seem too keen on the traditional crawling underneath the dining room table to help us decide who should be assigned which piece of cake. Nevertheless, he did concede in good sportsmanship to sit on the sofa with his eyes turned away from the cake while naming the recipients. And if you’re sans Parisian friends, you can still pick up your very own king’s cake in one of the many pastry shops around the city.

But aside from playing king for a day, there just isn’t much going on the streets of Paris in January. It’s as if the whole city is sleeping, and in a way that’s exactly what’s happening. Due to the cost of the holidays, many people just stay home – and that includes avoiding things like the grocery shopping. January is just about the only month when I see Innos (the local market) so deserted.

Because this is the slowest month of the year for retailers, then, someone got smart and decided that January would be one of the two months out of the year when shops are allowed to put everything on sale. The January sales are, in fact, something of a French institution (it’s not just shops in Paris that have sales, it’s the entire country), and while there are lots of tourists in the city for the other sale month of July, in January the locals tend to have the discounted merchandise to themselves.

The sale months are strictly regulated by the French government, so it’s not the free-for-all that it may resemble. There are some very specific rules. No one gets to start their sale sooner than anyone else (except Perpignan, which claims dispensation due to their proximity to Spain) in the spirit of fairplay (if not free market) principles. The sale is a progressive sale that can last for three weeks, with each week bringing steeper price cuts. The January sales are just the thing to knock people out of their lethargy and encourage them to hit the Metro and the shopping districts to snag a deal.