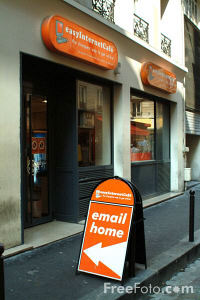 Stopping into an internet cafe at various points during a trip is becoming more and more common for most travelers, regardless of age or whether or not they’d consider themselves really tech-y. But sometimes getting online isn’t as easy as you’d think – and in some cities, finding the internet cafes is the first hurdle. In Paris, there are lots of places where you can get onto a computer and check email and such – so that’s good. But you might be surprised at some of the places you can get online, so here are some places to find information about internet cafes in Paris.

The website netcafeguide.com used to have the most comprehensive lists of internet cafe locations in cities all over the world, but if you go to that site now you’ll find a weird place-holder. Turns out World66 has bought netcafeguide.com – it’s great that the information hasn’t been lost, but it’d be good if someone put some kind of directional marker on the old site. No matter, you’ll find the old extensive list of Paris internet cafes right here on its new home at World66. And now the list is open source, so if you find any incorrect/outdated information, or have a new internet cafe discovery to add to the list, you’re able to do that.

Once you’ve found a computer at an internet cafe in Paris, however, you’ll be faced with a new dilemma – the keyboards may not be like the ones you’re used to. In fact, they’re not the so-called QWERTY keyboards at all, but rather AZERTY keyboards. The three rows of letter keys on French keyboards are as follows:

Depending on how much typing you’re doing, you can hunt & peck and get the job done without thinking too much about the keyboard layout. Alternately, you can look for internet cafes in Paris that have QWERTY keyboards instead. Paris Logue mentions one in Montparnasse called Cybercube, and you can check the websites of the various internet cafes listed on the World66 page (linked above) in order to find out if they have both QWERTY and AZERTY keyboards available. A couple mentioned on that page include Fat Tire Bike Tours (near the Eiffel Tower) and Paris-Cy Internet Cafe (between Saint-Paul and Pont-Marie Metro stations).

Of course, if you’re traveling with your laptop, you’ll be hunting for WiFi instead of relying on someone else’s computer. The availability of WiFi will vary widely – many hotels and hostels offer WiFi (although sometimes it’s for a fee), but there’s a good place to get a wireless connection in Paris that you might not have expected – McDonald’s.

If you’re anything like me, you avoid the golden arches like the plague when you’re traveling (heck, I avoid them at home, too), but McDonald’s is actually a great & reliable place to find WiFi in Paris. The Parisians call it “McDo,” and in addition to being a good place for free WiFi it can also be a place to use the toilet if you’re having trouble finding a place to go.

Paris Logue also reminds you that there are options for free WiFi in Paris, many of which are near places that ask you to pay for it – they are often gardens and libraries, and they are mapped out on this handy arrondissement map. (It’s only in French, but if you know the arrondissment you’re visiting or staying in, you’ll be able to find the free WiFi spots by clicking on that arrondissment number.) There are more Paris Logue tips to finding free WiFi in Paris here and here.