In pursuit of liberty – a la francaise! 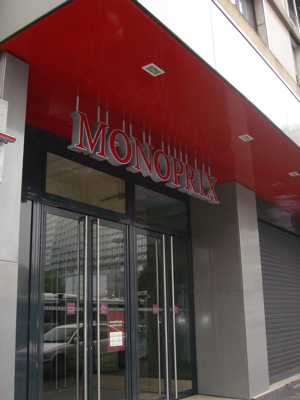 And you, too, Cecilia, are now free to shop at Monoprix!
Photo by Chris Card Fuller ©2007

When Nicolas Sarkozy reprimanded a Le Monde reporter for asking questions about his personal life, suggesting that the French weren’t interested in his private life, he may have made a valid point.

Judging by the way this month’s Elle Magazine has flown off the shelves of news stands (which features Cecilia Sarkozy on its cover), the votes are in. Cecilia Sarkozy’s recent decision to divorce the most important man of the moment in France has made plenty of French women (and even some men!) interested in knowing more about her ‘private life’.

But not really. What may be defined as ‘personal’ or ‘private’ in this case is, in essence, the constant striving for one of the three pillars of the French republic: Liberty, Fraternity, Egality.

Has Cecilia Sarkozy captured the attention of the French population (and even international attention) because of her strike for liberty on a personal level, or has she trivialized the definition of liberty?

The Russian tour guides (during our sejour in Russia and the former USSR) have had a habit of saying these days “Independance from what, independance from whom?”
. . . the glimmer of perestroika becomes a memory mired in rising price of bread meanwhile the stretch limos multiply . . .

After reading Elle’s exclusive interview with Cecilia Sarkozy, I had to agree with President Sarkozy, that when all is said in done, one’s personal life, really should be left ‘personal’.

Especially when a woman’s definition of ‘liberty’ turns out to be ‘wanting to be free to go to the grocery store’. Say what?

Did we miss something here? Well, her husband was ‘difficile a vivre’ i.e. hard to live with. TOUT LE MODE EST DIFFICILE A VIVRE. Everybody is hard to live with. We belch and fart and often say or do hurtful things to one another. Some people are more hard to live with than others. Thousands of spouses in France live with partners who are physically and verbally abusive. They should seek their liberty. Some will do just that, and some will die for it. So, what is liberty? And what is responsibility? Where do you draw the line – where your life no longer has meaning? And is it for you to decide – whether your life has meaning or not?

I am hoping that I will read some more insightful words about the myriad responsibilities of being married to a servant of the republic. But there’s not much more – except a hint, that Cecilia Sarkozy might like to do something in the future. She is disappointed that the media criticized her instrumental negotiations in the release of Bulgarian nurses in Libya. No one will criticize her choices of cereal brands at the grocery store.

The moral of this story is: If you want to be free (from the media), lead a totally boring and penurious life. Grow old. Try not to do too many good deeds. Greta Garbo almost succeeded in this, but even to the bitter end, she never quite achieved liberty. She never escaped the public’s fixation on Garbo as the embodiment of beauty. Maybe now with the passing of generations, her name will be forgotten and she can find some peace.

In the final analysis, liberty, in its ultimate form, may be an illusion.

However, on a ‘personal’ level’, every day I awake in good health with food on the table, sitting across from a spouse who cares about my well being, every day I can continue to write (without censure, without risk of imprisonment), these, for me, are great freedoms. Free from hunger, free from disease, free to love and beloved, free to express oneself without fear.

P.S. And in respect for a woman’s desire to get as far away from media’s prying eye as possible – I have included only a photo of Monoprix. May we all find our freedom to live in anononymity -if we so choose.