In Paris, It's All About the Food 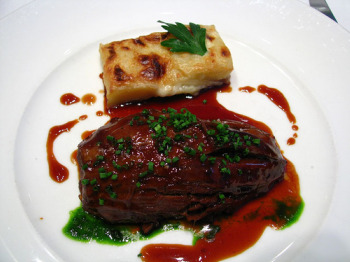 Close your eyes and think of Paris. Block out the Eiffel Tower, and what do you see? Chances are a recurring scene in your Paris dreams involves a streetside cafe, a long, lingering lunch at a tiny bistro, or an endless, candlelit romantic dinner over rich French food and delicious French wine. For many people, it’s nearly impossible to separate the idea of a French vacation from the idea of eating copious amounts of French food. Often duplicated, rarely perfectly imitated, French cuisine is one of the best in the world.
You’ve scored cheap tickets to France, you’ve checked into a charming Paris pension, you’ve hit all the major museums, you’ve drooled over designer clothes, and now….you’re going to want to eat….a lot. But dining in a French restaurant, particular in Paris can be a daunting prospect. Tales of horribly rude waiters and mediocre, overpriced meals at touristy restaurants can make you want to just settle for wine, cheese and bread in your hotel room every night (not that it would be so horrible). But fear not, ordering in a Parisian restaurant doesn’t have to be so hard. First, you need to study your French pronunciation guide. It’s no myth that the French are sticklers about their language. But, they will appreciate a solid effort, even if it isn’t perfect.
Once you’ve got the basics of communication down, it’s time to learn the French menu translation to make sure that they cheese you thought you ordered was actually the innards of a cow (and you’re a vegetarian). Learn the basics words for common French dishes and you’ll decrease the risk of ending up with an unwanted surprise on your plate. So don’t be afraid of ordering faux-pas, just do your homework and you’ll reap the rewards of your dream dining experience in Paris.
Photo by mikeandanna