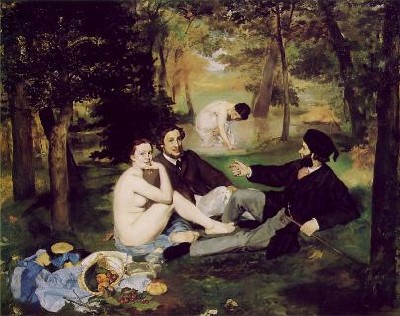 Simply shocking. That was the reaction when Edouard Manet’s painting ‘Dejeuner sur l’Herbe’ (Luncheon on the Grass) was first unveiled at the Salon des Refuses in 1863.

This painting reflected to some extent the new-found leisure time of Paris’s Second Empire society in the last half of the 19th century.

What horrified most viewers about this picnic scene by the Seine River – wasn’t exactly the appearance of nude women. Unlike past painters’ renditions of pastoral frivolity, rather than Classic gods and goddesses, these were contemporary unclothed women accompanied by clothed men. Manet had crossed an unspoken barrier from the ethereal fuzzy world of romance into the flesh and bold, in-your-face reality – that would be deemed ‘obscene’ by some of his contemporaries.
It didn’t make much difference to these critics that the Dejeuner sur L’Herbe‘was similar in composition to past great artists’ works such as Georgione/or Titian’s Pastoral Concert. The defiant regard of one of the picnickers who peers out of the painting with an almost taunting glance – was the icing on the cake. 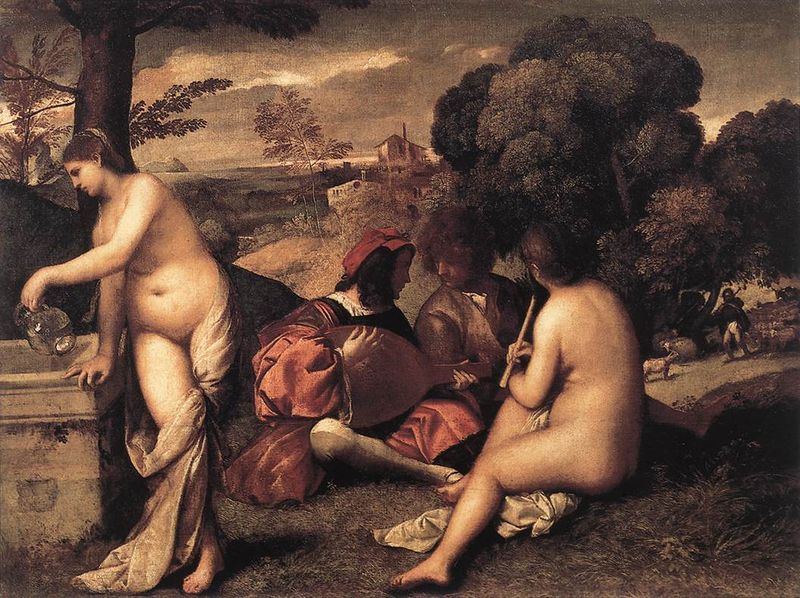 But was Manet and his impressionist contemporaries as wild as the weekend revelers portrayed on their canvases- or was Manet’s crowd perhaps more prudish and conservative observers? The actual painting of ‘Luncheon on the Grass’ was painted at home in Manet’s studio with models he had used for past paintings as well as family members. Although he may have been inspired by the revelry not far from his home estate – it’s not suggested that he joined the wild parties for a slug of wine with a paintbrush in hand.

In his book Impressionist Paris, The Essential Guide to the City of Light, Julian More, relates just how the artist’s proximity to the Seine River created the seed inspiration for one of the most important paintings of the ‘Impressionist revolution’.

Manet’s family home was a sixty-acre estate located at Gennevilliers (which is in the northwestern suburbs of Paris). Author More describes Manet’s concern, in spite of his radical political views about the increasing number of fun-loving, cork-popping daytrippers who might infringe on the privacy of his family compound. Nevertheless, that didn’t stop him from marveling at the cavorting women known as ‘grenouilles’ or ‘froggies’ which may have tweeked his artistic imagination. These were the weekend laundresses and shop assistants who didn’t hesitate to strip down for a swim in the Seine.

Likewise, another shocked notable, was the Emperor Napoleon III, himself. Could it be possible that such things might occur just on the outskirts of Paris? Perhaps to disprove his horror, and assuage his curiosity, the Emperor decided to visit La Grenouillere (The Froggery), a well known restaurant and bathing locale. Surprisingly, not a single ‘grenouille’ was in sight.

Another theory concerning the famous ‘Dejeuner sur L’Herbe’ painting was the possibility that Manet meant to draw attention to another well-known lieu for illicit behaviour and prostitution – the Bois de Boulogne.

In the 1860s and 70s, over a hundred ‘guinguettes’ or weekend riverbank ‘beer-garden’ style restaurants bordered the Seine River. Many of the scenes from famous impressionist paintings reproduce the ambiance of good times, flowing wine, dance and laughter – that served as a welcome break from the weekday drudgery of long working hours in Paris.

Author Julian More also mentions Monet, Renoir and Berthe Morisot. Were they attracted by the siren call of the weekend parties? If Renoir and Monet were swept up in the frolicking, their canvases only offer hints according the poet Mallarme ‘painting not the thing, but the effect it creates’.

More reminds us that Berthe Morisot probably never even made it to the famous guinguette restaurants if she followed her mother’s advice: “You go there alone, but you come back at least two.”
This was no place for ‘respectable women’.

Nowadays, you can still go to the guinguettes on Sundays – just outside of Paris in such towns as Joinville-le-Pont (Chez Gegenne is one of the most well-known). You can dance to traditional French accordion music and enjoy a plate of fried smelt fish. There’s nothing very daring about this – and you don’t want to try swimming in the Seine! However, there’s still no better place to spend a sunny summer afternoon, far from the Paris traffic jams and the tour buses.

>> Listing of Guinguettes in the Parisian area

To Learn More About the Impressionists in Paris:

The original painting is displayed at the Musee d’Orsay.
Closed Mondays.

During our last visit, Manet’s ‘Dejeuner Sur L’Herbe had been moved to a ground floor location (it used to be on the third floor with the majority of the impressionist works. You will find ‘Dejeuner sur L’Herbe to the left of the main hall (almost at the very end of the left side mini-galleries).