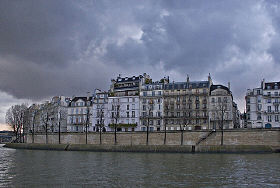 While countless tourists flock to the Île de la Cité every day of every year, the smaller Île Saint-Louis right next door often gets overlooked or forgotten. True, it’s primarily residential and lacks the big-name sights of its big island neighbor, but that’s part of what makes a stroll through this little island so incredibly enjoyable. Plus, it’s home to Paris’ best ice cream shop. No, really.

While the Île de la Cité can lay claim to the designation of where the city’s first inhabitants lived, not to mention the point from which all distances are measured in the whole country, the Île Saint-Louis’ story began as the place where the people who lived on the bigger island grazed their cattle and stored excess wood! That’s hardly an illustrious beginning, but the Île Saint-Louis is certainly nothing remotely close to those humble days now.

The Île Saint-Louis is home to one major church that’s open to visitors – the Saint-Louis-en-l’Île Church. It was built in the mid-17th century, and is a Catholic church. Don’t expect it to be the most impressive church you see in Paris, and don’t feel badly about skipping a peek at the interior entirely. It may be the island’s only “big” church, but as far as I’m concerned it’s far from the main sight.

Arguably the top attraction on the Île Saint-Louis is an ice cream shop. In fact, it’s not even really the shop so much as the ice cream counter in the window – and the line that can stretch down the street – that people notice. I’m talking here about the famous Berthillon, home of the best ice cream in Paris. You’ll be stunned at the array of flavor choices, and wowed by the intense flavors. And before you ask, yes – it’s worth the wait.

Ice cream in hand, your best bet for seeing the Île Saint-Louis is just to wander a bit aimlessly. It’s a really small island, and the vast majority of the buildings are high-end apartment buildings, but it’s often a quieter spot than many other spots in tourist-laden Paris, and it’s a glimpse of something more akin to real Parisian life.

If you’re really into “sights,” you can find a building in which Marie Curie lived at No. 36 Quai de Bérthune, but beyond that you’re mostly going to be looking at beautiful architecture and some charming shops and restaurants. One end of the Île Saint-Louis is connected to the Île de la Cité via a small bridge, and you can get some good pictures of the back of the Notre Dame cathedral from there.

Getting There
The Île Saint-Louis is served by a few Paris bus lines, but the Paris Metro doesn’t make it onto this island. There are Metro and RER stops on the Île de la Cité, however, and you can then walk over to the Île Saint-Louis.

Staying There
The Île Saint-Louis is even more residential than its larger island neighbor and there are no Paris hostels to be found here, but there are a few luxury boutique hotels in Paris on the small island. They will almost certainly break the bank for most budget travelers, but if you can afford the splurge I can think of worse places to stay than the Île Saint-Louis!