How to Use the Paris Metro 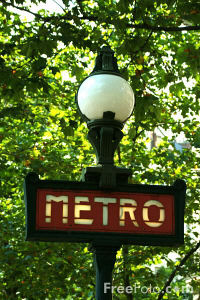 Paris is a fantastic city for walkers, but if you’re in a hurry or the weather’s turned foul or you just want to give your tired feet a break, the city is also blessed with one of the best subway systems in the world. Here are the main things you need to know about how to use the Paris Metro.

The Paris Metro, the full name of which is the Metropolitain, has 16 lines, covers more than 130 miles total, and is accessible by 300 stations. Looking at a map of the Metro in Paris may be a little intimidating at first, as it may resemble a pile of colorful spaghetti overturned haphazardly on a plate, but it’s actually quite easy to master – and once you do, the city opens up to you in a whole new way.

>> And for more planning tips, don’t miss the great advice in our comprehensive visitor’s guide to Paris.

The first thing you’ll want to do is figure out how to read the Paris Metro map. Like many subway systems, the lines on the subway in Paris are not only numbered and color-coded but also named based on the direction they’re going. That means each line will have two names – one for each “end” of the line – and you’ll need to not only pay attention to the stop you’re going to get off at but also the name of the final stop in that direction so you know which track to head for in the Metro station.

Here’s a small version of the Paris Metro map (to download one you can actually read & plan from, see the official Paris public transportation website here): 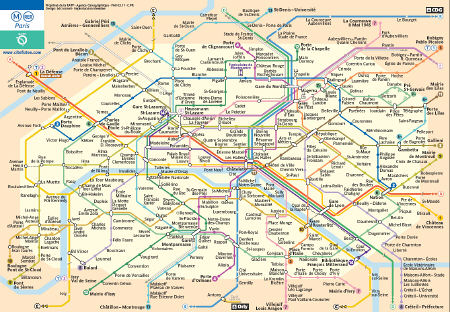 Get your hands on a Paris Metro map as soon as you get to town (or download one in advance), and then figure out your “home” station – this is the one that’s closest to your hotel or hostel. This will help you orient yourself in the city, and also in relation to anything you want to see or visit in Paris.

Next, when you’re ready to hop on the Metro and go from your hotel to the Arc de Triomphe, here’s what you need to do:

So, let’s talk a little bit about Metro tickets now.

Standard Metro tickets are called “T+” tickets, and are good for 90 minutes of one continuous Metro journey. In other words, you’ll use your ticket to enter the Metro and that ticket is still good for your whole trip – even if you have to change trains two or three times to get where you’re going – so long as the trip doesn’t take longer than 90 minutes. As a side note, these T+ tickets are also good on Paris buses and trams and in zone 1 of the RER.

You can buy Metro tickets in Paris one at a time, or in packets of ten which are called a “carnet” (kar-nay). The prices for these will change occasionally, so be sure to check with the official Metro website to see what the current rates are – but as of this writing, you’ll pay €1.70 for one ticket, and €12.00 for a carnet. A carnet of tickets can be a really good option because they’re not date-stamped and can therefore be used over a period of days, weeks, months, or even longer. Plus, because you’re just buying 10 separate tickets, groups traveling together can use a whole carnet split among them.

There are other passes, besides the carnet 10-pack of tickets, which may make sense depending on how long you’re planning to be in Paris and how much you plan to use the Metro and other public transportation. These passes include a carte orange for weekly or monthly blocks of time, or Paris Visite cards which come in one-day, two-day, three-day, and five-day increments. 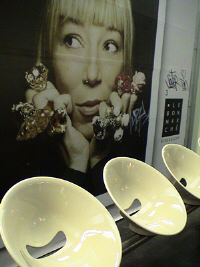 Most things you’ll want to see and do in Paris are within zone 1 and zone 2 of the Paris transportation map; going beyond those zones will cost you extra on the Metro or any other method of transportation. It’s good to know that La Defense and St. Denis are in zone 3, and the city’s airports are in zone 5. Some of the transportation cards mentioned above are for zones 1-3, while others include 5 zones – be sure to figure out how many zones you’ll need to cover before you buy the more expensive all-zone passes.

Hours of Operation
Even though it may seem like there’s always something going on in Paris, the Metro doesn’t run 24 hours a day. Sunday-Friday, it starts up at 5:20am and shuts down at 1:20am the following morning (the trains apparently only need four hours of beauty sleep). On Saturday nights, you’ll get an extra hour’s worth of train time – from 5:20am through 2:20 the following morning.