How to Use the Montmartre Funicular in Paris 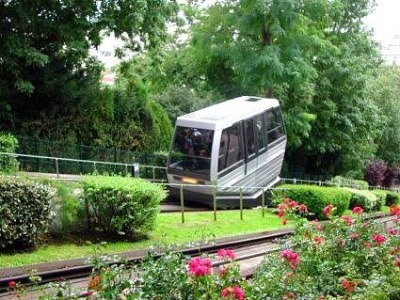 I’m not sure what it is, but anytime I get to a city and find out that one of the modes of transportation available to me is a funicular, I get excited. Maybe it’s the word “fun” right in the name. Despite funicluars being, essentially, a tram that moves up the incline of a hill rather than along a flat surface – and nothing more – they remain a source of amusement for me.
If you can relate, then you’ll be pleased to know Paris has a funicular, and it just so happens to serve one of the most popular tourist areas of the city – Montmartre. Here’s what you need to know about the Montmartre funicular to incorporate the “fun” into your next Paris trip.
>> Learn more about the hilltop neighborhood served by the funicular in this Montmartre guide
>> Learn more about the many ways to get around Paris for the rest of your stay in the City of Lights

What is the Montmartre Funicular 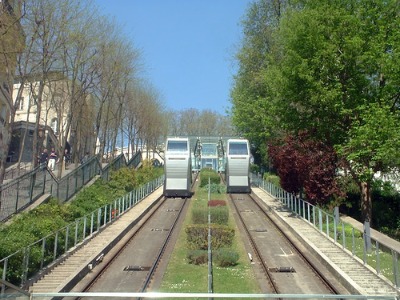 The funicular railway of Montmartre, called the Funiculaire de Montmartre in French, debuted in the summer of 1900. It’s been rebuilt twice since then, and these days it ferries roughly 2 million people every year up and down the Montmartre hill. If that wasn’t noteworthy enough, a one-way journey takes less than 1.5 minutes.
The Montmartre funicular is operated by RATP, which is the same company that runs the Paris Metro and the buses in Paris, which means you won’t have to worry about separate tickets just for the funicular.
>> Montmartre funicular “fun” fact – there are no drivers in the funicular cars. There are sensors in the floors of each funicular car, and other computerized mechanisms in place to trigger the funicular to close its doors and begin moving once it’s either full or enough time has passed.

How to Ride the Montmartre Funicular 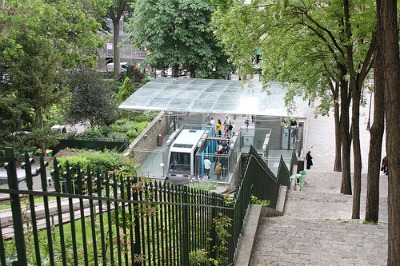 The Montmartre funicular connects a station between the Place Saint-Pierre and the Place Suzanne Valadon (at the bottom of the hill) and a station on the Rue du Cardinal-Dubois (at the top of the hill). The upper station is very close to the Sacre-Coeur Basilica – you’ll still have some stairs to climb to get inside the church, but the funicular eliminates the need to climb the more than 200 steps along the Rue Foyatier.
As mentioned above, the funicular at Montmartre is part of the RATP transit system in Paris – you can use the same T+ tickets you have already purchased to ride the Metro and the bus when you want to ride the funicular. The funicular is considered part of the Metro system, in that you get one Metro ride per T+ ticket. In other words, if you’ve taken the Metro to get to the bottom of Montmartre you can’t use the same T+ ticket for the funicular to the top of the hill.
>> Note that the same Paris transportation passes that work in the Metro and on buses also work on the funicular – passes like the Paris Visite Card or a carte orange.
Each T+ ticket costs €1.70, but you can buy them in packs of ten – called a “carnet” – for €12.00. Each ticket is valid for 90 minutes of transportation time (excepting the one-Metro-ride-per-ticket rule), so you can transfer from Metro to bus, or bus to funicular, on the same ticket as long as you’re within your 90 minutes.
To get into the stations at either end of the funicular, you’ll put your T+ ticket into a machine just like the ones you’ll no doubt be used to in the city’s Metro stations. There are booths at both stations where you can buy tickets if you don’t have any, but they aren’t open all of the hours the funicular runs – so if you’re planning a late night trip to the top of Montmartre make sure you’ve got your tickets already.
The Montmartre funicular operates starting at 6am and ending at 12:45am. 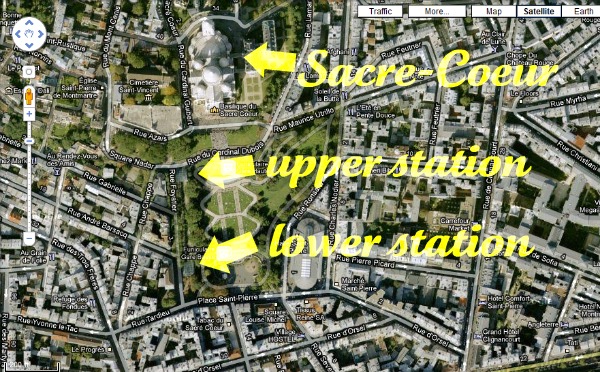 >> For a peek at what the lower funicular station looks like before you get to Paris, check out this cool 360-degree picture.
photos, top to bottom, by: budgetplaces.com, Matthew Black, skuds