How to Use Paris Night Buses (Noctilien) 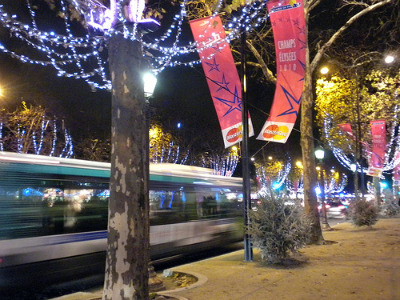 I’ve always been a fan of the Paris Metro – it’s the first public transportation system I figured out by myself, and it remains my favorite subway system. But there are some very good reasons why you should also be familiar with Paris buses as well. You can get a super-cheap unguided city tour from the right bus routes, you aren’t so disoriented when you see what’s outside at all times, and – this is perhaps the most critical part – there are several hours in the middle of the night when no other public transportation besides the buses is running.
This is when Paris night buses come in handy.
The night buses in Paris, called Noctilien, cover the city of Paris as well as the suburbs for the five hours every night when regular buses and the Metro are taking their nightly break. The Noctilien buses run from 12:30am until 5:30am – and even if you don’t plan on being out late at Paris nightclubs, you might still want to grab a Paris bus map to have with you just in case that lovely dinner runs into the wee hours.
There are more than 45 Noctilien lines in and around Paris, so their reach isn’t as far as the normal combination of Metro, bus, and RER lines in Paris, but if you’re staying somewhere in central Paris it’s a much cheaper alternative than taking a taxi after hours. Check with your hotel or hostel to see where the closest Noctilien stop is to where you’ll be laying your head at night.

How to Use Paris Night Buses

Where do Paris night buses go?
There are a total of 47 Noctilien lines in Paris. The two main ones that tourists might end up using circle the city and connect all of the major train stations in Paris. The N01 runs clockwise, the N02 runs counter-clockwise, and each make stops at Gare de l’Est, Gare de Lyon, Gare Montparnasse, and Gare Saint-Lazare.
Beyond those circular lines, there are spoke-like lines that run from the city center out into Paris’ suburbs, with stops along the way in various parts of the 20 central arrondissements. Lines with two digits after the N are primarily for central Paris, and lines with three digits after the N are the ones that go further into the suburbs.
To figure out the route you need, you need to know how to read the bus map. Read through the section on “reading a Paris bus map” on the Paris bus system post to get an idea of how to figure out what you’re looking at, and then check out this Paris night bus map. As mentioned above, because the Noctilien network of bus lines isn’t as extensive as the regular bus lines, it’s a good idea to ask at the front desk of the hotel or hostel you’re staying in where the closest Noctilien bus stops are. 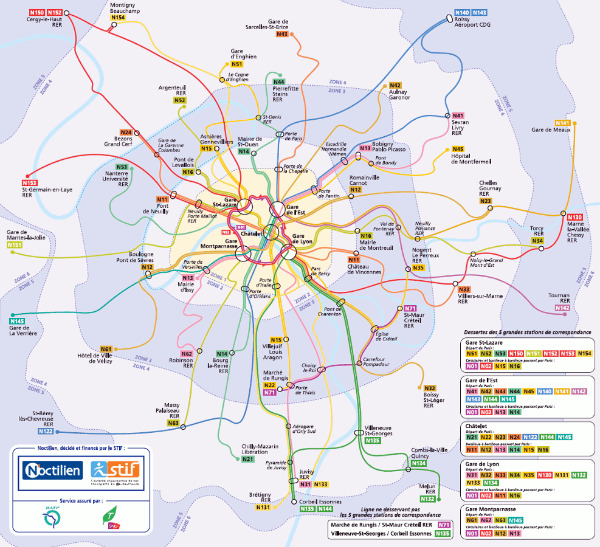 What do Paris night buses cost?
Paris’ night buses are operated by the same company that runs the Metro and regular buses, so the tickets you buy for other transportation in Paris are the same ones you’ll buy for the Noctilien buses. Individual T+ tickets cost €1.70 or you can buy them in books of 10 – called a “carnet” (pronounced kar|NAY) – for €12.00.
If you’re traveling a long distance – into one of the suburbs of Paris from the city center, or from suburb to suburb – then you’ll use up one T+ ticket for each “zone” you cross. Most visitors who are staying within the city center, however, will use only one T+ ticket for their entire trip.
How do Paris night buses work?

The Noctilien buses in Paris operate in the same way that the daytime buses do – you buy a ticket, validate it in the machine on the bus, and you’re good to go. You’ll know it’s a night bus and not a regular bus because there’s an N before each bus line number – N01, N02, etc.
You can buy individual T+ tickets on board the Noctilien buses from the bus drivers, but you won’t be able to buy the 10-pack carnet. Unlike with the regular buses, if you change buses on the Noctilien service you’ll need to validate another ticket.
When do Paris night buses run?
The Noctilien starts up at 12:30am and runs until 5:30am each night – exactly the hours when regular Paris buses and the Metro aren’t running. Buses run more frequently on weekend nights (it’s roughly 10 minutes between buses with the N01 and N02 lines on Friday and Saturday nights, as opposed to more than 15 minutes between buses Sunday through Thursday), but it could be up to an hour between Noctilien buses depending on where you’re going. In other words, look up the schedule in advance so you don’t have to wait an hour at a bus stop in the middle of the night.
>> Be sure to check out the official Noctilien website for more information – the pricing is a bit out of date, but the route information is extensive.
photo at top by l.e.o., photo of Noctilien route by jean-louis zimmermann