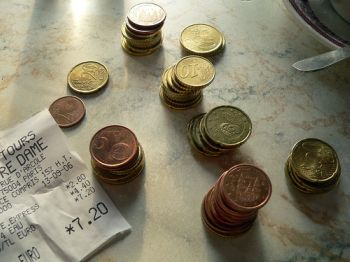 One of the questions travelers often forget to look up before they’re faced with a bill is what the tipping customs are in the place they’re visiting. Americans are used to adding a tip to pretty much every check they’re presented with, but most of us know that’s not how things are done elsewhere. How things are done, however, is often a mystery.
So – what are the rules for tipping in Paris?
Thankfully, there are all kinds of good resources online nowadays to help answer this question – because it’s not as straightforward as you might think. Even if you’ve traveled through other parts of Europe (or even other parts of France), you’ll want to pay attention to how to tip in Paris, because things are done a little differently in the French capital.

Tipping in Paris Restaurants and Cafes

You might be familiar with the concept of “service included” on the bill in some countries, and France has this as well. You’ll typically see the words service compris on the bill or right on the menu in any French restaurant or other dining establishment, because by national law there’s a 15% service charge added to any bill. In other words, regardless of the size of your party or what you order or where you sit, your bill will have an additional 15% service charge included on it.
This doesn’t mean you should never leave anything above and beyond that 15%, however. Outside of Paris, many people don’t leave an additional tip, but in Paris tipping is far more common. The extra you leave above the 15% that’s included should be a sort of “thank you” note directly for your waiter (a few euro, usually proportionate to what you’re spending, no more than 5-10%, but not a fixed percentage) left on the table. And if you’re just having a drink or two in a cafe, a bit of pocket change is usually sufficient.
The 15% gratuity that’s automatically included doesn’t go to your waiter, it’s split between the waitstaff and sometimes the restaurant owner keeps a portion of it – so the extra tip you leave is the only part you know for sure will tell the waiter you appreciated the service you got.
You’ll probably know when it’s appropriate to leave an extra tip, but generally speaking it’s when you’ve gotten especially helpful service – a waiter who was patient with your mangled French, who accommodated potentially odd food requests, who dealt with a large group without blinking, etc. And of course you’re still not obligated to tip, even if the waiter did all of these things.

Although there isn’t an automatically-included gratuity with Paris taxis the way there is in restaurants, tipping a huge percentage of the total fare like you might be accustomed to doing in many cities just isn’t done in Paris. Tipping in Paris taxis isn’t obligatory, although most people (including Parisians) do tip a small amount.
Again, as is the case with restaurants, you’re likely to know when a taxi driver warrants a tip and when he doesn’t. If the driver helps you with luggage, or cheerfully points out landmarks along the way, or if you’re traveling in a group – then a tip is warranted and welcome. A tip of a couple euro, regardless of the fare, is fine – some guides recommend 10% of the fare, but if it’s a quick taxi ride across town that might be excessive.
Note that if you’ve booked a seat on a shuttle in Paris to get you to/from the airport or your hotel, a 10% tip for assistance with your luggage is standard.

Tipping at Hotels in Paris

It’s nice to leave a tip for the cleaning crew in your hotel room, assuming you’ve had them come in and perform their regular duties. For a stay of less than two days, unless you’re in a particularly fancy hotel, you probably don’t need to worry about a tip – but for 3+ days a euro or two per day is a good rule of thumb.
Does your Paris hotel have a concierge, a porter, or someone else who’s helped you with your bags, getting a taxi, or something else? They’ll need to be tipped, too. A euro per bag goes to the person who helps you with your luggage, another euro goes to the person who hails you a taxi (if it’s not the same person), and if the concierge does the impossible by getting you tickets to a popular event or a table at a famous restaurant then a bigger tip is a very good idea (as much as €10-20 isn’t unheard of, depending on the service you got and where you’re staying).

Other Tipping Rules in Paris

Unless you see the words pourboire interdit somewhere – meaning “tipping is forbidden” – these are other situations where you’ll want to have a few coins available for tipping in Paris.