How Much does a Gourmet Meal Cost in Paris? 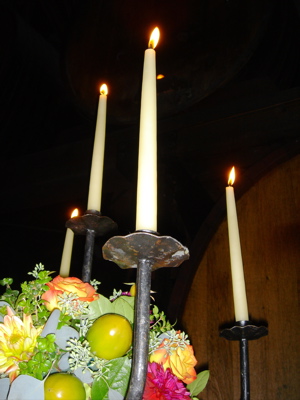 $60 per person. And up.
$136 per person at the Grand Vefour (88 Euros for the lunch menu -not including wine)
$170 per person at the Jules Vernes (Eiffel Tower) (110 Euros for the lunch menu including wine)
The exchange rate between the Euro and the U.S. Dollar has never been worse (at least since we’ve been coming to France) – even worse than the oil crisis days of the seventies. And if you thought that was bad, the cost of living index has been inching upward in France. It costs Parisians more money to do their daily grocery shopping – and those prices are reflected in restaurants as well.
So, can you afford to have at least one gourmet meal while you’re in Paris? For foodies, it would be inconceivable to spend time in Paris without this indulgence. So, here’s the scoop:
If you’re REALLY studious, you can find an excellent three course-gourmet meal accompanied by a glass of wine for $60.00 per person. I know this is true because we did so last night. (You note that I said, a glass, not a bottle of wine and this isn’t including ordering any extras such as a bottle of spring water or coffees).
My two guidebooks for this pursuit are “Les Meilleurs Restos a petits prix” (The Best Restaurants at a Little Price) by Catherine Jarrige published by Parisgramme.
P.S. Les Meilleurs Restaurants a Petits Prix 2008 is now on sale.
Paris Pas Cher 2008 by Anne et Alain Riou
Prices of restaurants have increased so quickly that the menus quoted in Les Meilleurs Restos (which was published in 2005) have already increased – for example the 22 Euros Menu at the restaurant where we ate last night (Giufeli) had increased to 28 Euros.
Another restaurant’s menu had increased from 18 Euros to 22 Euros.
If you have an option between ordering off of a ‘Menu’ as opposed to ‘A La Carte’ you will almost always fare better if you stick with the menu (menu in this case means a set meal with a starter and a main dish. Sometimes the dessert is also included – and sometimes it isn’t).
In the top restaurants, lunch is almost always the wise choose to save stress on your pocketbook which may not be GUCCI or HERMES. And by the way, if your choice while staying in Paris is to buy the handbag or go out to a gourmet restaurant – EAT! The memory will last for a lifetime. The purse is just another thing.
After you’ve carefully studied your restaurant guidebook, be sure to take a look at some of the restaurant forum websites such as Restoaparis.com or Eat-Out for updates on price increases and any changes in quality of service. (Eat-Out is the English translation of Ou Bouffer.com). I’ve found Restoaparis to be the most thorough and up-to-date when it comes to Paris restaurants. Pascal leads a dynamic team of restaurant tasters that leave no stone unturned when it comes to finding the little gems.
More Tips on Where to Eat