Hotels Near the Arc de Triomphe 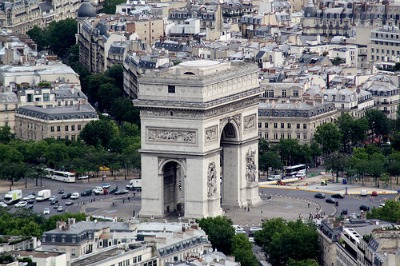 Not only is the Eiffel Tower the most recognizable monument in Paris, it’s one of the most recognizable monuments on earth. But another one of the top monuments in Paris is the Arc de Triomphe – there may be other triumphal arches in the world, but this tends to be the one most people think of first. Who wouldn’t want a hotel near the Arc de Triomphe when visiting Paris?
Although the Arc isn’t located at the center of the circle that is the city of Paris, it’s well-connected to everywhere the Metro goes by several Metro stops in the area. And it happens to be close to two stops on most visitors’ must-see lists – the Champs-Elysees and that famous Eiffel Tower – meaning you’ll get to do some walking in some of Paris’ best-known neighborhoods.
As you might expect, hotels around the Arc de Triomphe are typically pretty expensive. I’ve tried to hunt down the ones that aren’t budget-killers – but these are by no means what I’d call budget hotels in most cases. If your budget is your primary concern you might want to look elsewhere in Paris for the best deals.
On the map below you’ll find the Arc de Triomphe marked with a red star and the hotels I’ve included in this post marked with blue icons. You can get more information about each hotel by clicking on the blue icon on the map, or by scrolling below the map to read a brief description.
>> For other accommodation options in this general area, don’t miss my list of hotels near the Champs-Elysees, too.

Hotels in Paris Near the Arc de Triomphe