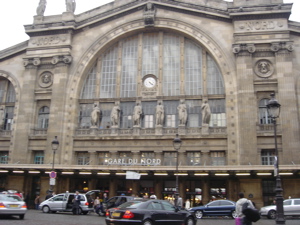 In many cities, the idea of getting a hotel near a major train station isn’t an appealing one. But sometimes, whether it’s because those are the only hotels with vacancy during a particularly busy time or you just need to be close to a station for an early morning departure, staying near a train station is what you have to do. In Paris, there are several train stations scattered throughout the city – and one that many people end up staying close to is the Gare du Nord.
The Gare du Nord is the Paris end of the Eurostar train that connects the French capital with London (read more about how to get from Paris to London) – and although the neighborhood around the Gare du Nord isn’t exactly Paris’ loveliest, there are quite a few hotels nearby from which to choose if you need to stay nearby.
On the map below you’ll find a few hotels marked by blue icons that are either just down the street from the Gare du Nord or a few minutes’ walk from the station. You can find out more about each one by clicking on the icon itself on the map, or by scrolling down below the map to read a brief description of each property.