Hostels in Paris: Update for Spring/Summer 2008 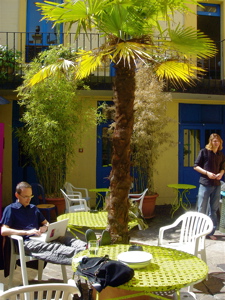 Courtyard at 3 Ducks Hostel
Photo by Chris Card Fuller ©2008
First, let me be clear on one thing – I’ve never slept in a Paris hostel, but after the last week of visiting a few of the popular hostels in Paris, I can tell you this, you can find a hostel to meet just about everyone’s taste. Clearly, some hostels outshine others when it comes to tidiness and others are better places if you’re a party animal. Each hostel has its pros and cons.
I haven’t visited all the hostels in town, but those that I’ve seen are quite different from one another – the parts of town are quite different, the ambiance is different, and the rules are different – some have curfews, some don’t. Some include breakfast. Some have bars. Some have free internet – others offer paid internet. Some provide sheets. Some, you have to pay for your sheets and towels. You’ll want to ask all these questions before booking, and also, be sure to ask about deposits. Some will not provide refunds if you decide to leave early. Be sure to book as early in advance during the summer season. Rates can range from 24 Euros for an 8 to 10 person dorm to 80 Euros for a single room with shower and toilet.
In a recent post, I wrote about hostels and budget hotels in Paris in the Montmartre/Gare du Nord neighborhoods in northeastern Paris.
This week, I visited The Three Ducks Hostel, 6 Place Etienne Pernety; Metro: Felix Faure in the 15th, Young & Happy, 80 Rue Mouffetard; Metro: Censier Daubertin, 80 Rue Mouffetard and OOPS! which is a new hostel in the 13th (walking distance from Rue Mouffetard), 50 Avenue des Gobelins; Metro: Gobelins.
First impression – the reception desk clerks at all of these hostels were exceedingly polite and helpful. Every single person that I’ve met at reception has been multilingual and totally competent.
So here’s a quick summary of general impressions. Needless to say, guests who have actually slept over at any of these hostels can give you a much more detailed description. But this is just a thumbnail sketch of the hostels’ public areas and their neighborhoods:
Three Ducks. The Three Ducks is in a quiet residential part of the 15th arrondissement. This is the probably the closest hostel to the Tour Eiffel. I would consider this to be a reasonably safe area to walk around at any time of day or night (which I did in returning to Montparnasse) however there’s not much foot traffic, so for single women I would suggest sticking to the main boulevard if you’re walking alone at night. 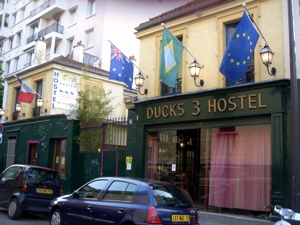 Three Ducks biggest plus (in my opinion) is its bar. There’s a good choice of beers. I had a Grimberger for 4 Euros, but you can also order draft beer for less. Also, I can say this because I’m a ‘mature married woman’. Of all the places I visited, Three Ducks definitely has the most attractive bar crowd. Whether you’re looking to meet gorgeous women or men – they’re here. I would definitely recommend Three Ducks if you come to Paris with your mates (that’s the Australian version, not the American version) and you’re not too picky about the general tidiness. Basically what you want is a place to stretch out for few hours and party the rest of the time. Here you have to rent sheets and towels, the WIFI is NOT free, but the computer is. A simple breakfast is included in the price of the room or dorm. I took a look at one of the dorms – and personally, for me, it would be cramped.
The Young & Happy Hostel on Rue Mouffetard is in the ideal location. There’s no bar here because the whole street is filled with bars, cafes and restaurants, so there’s no reason to have a bar, but it does have a downstairs kitchen/breakfast area which still has the medieval vaulted ceiling.
I spoke with Rachel who hails from New Hampshire. She’s the second American I’ve met working at a hostel or budget hotel (the first was Reggi at the Caulaincourt). You might have noted if you pick up hostel brochures (or looked at their websites) that they all look similar in format. That’s because many of these hostels have same owners. Don’t let the brochures fool you – each the properties vary greatly. At the Young & Happy, I was unable to see a room, but I was told that the dorms have no more than four beds per room. Prices start at 24 Euros and go up to 28 Euros for a double.
Oops! Hostel is much more recent than the other hostels I’ve visited. It’s located in the 13th arrondissement and you’ll find it’s very easy to walk to the Latin Quarter from here. Tonight, they surprisingly had a room available but I would suggest booking a room in advance if you’re coming during the summer.
This has to be the creme de la creme of Paris hostels. You pay a little more, starting at 30 Euros during hight season for a 4-bed dorm up to 80 Euros for a private room with toilet and shower. Sheets are included. WiFi and/or computer usage is FREE. Breakfast is included. For breakfast you can have croissants, cereal, bread, orange juice, coffee, tea, or hot chocolate. Have I died and gone to heaven? Everthing here looks new, tidy and more like a chain hotel than a hostel. If you speak Portuguese, this is the place for you – you’ll find lots of Brazilians here. I spoke to one guest who told me she had been studying France in the Loire Valley region. She was staying in Paris before heading back to Brazil.
She had stayed at Woodstock first and moved because she didn’t like sleeping in the dorms which are coed and, she felt, overcrowded i.e ten to one room! She thought paying a few extra Euros was well worth it for a room at OOPS! Personally, if I were going to choose a hostel in Paris, I think I’d try out OOPS! first simply because it’s the newest and the location is in a good neighborhood with easy access to the student quarter which I love. (I would also opt for this choice if I was jet-lagged, exhausted, and just wanted to sleep).
Check-in time is 4 pm and Check out time is 11 am. If you arrive early, the hostel will hold your luggage for you until check-in time. There are no refunds if you choose to cut your stay short. The hostel is open 24 hours (meaning there’s no lock out at night time).
If I were going to choose a place strictly for social reasons, I might opt for Three Ducks.
In the Montmartre, Gare du Nord areas, I would definitely check out Peace & Love for its social aspect and newly renovated private room and the Hotel Caulaincourt for its great Montmartre location.
The one surprise was finding that La Maison no longer exists. You may find some sites that are still listing it at 67 bis Rue Dutot in the 15th arrondissement. I found a boarded-up building. Some people have told me that it closed about a year ago.
I haven’t yet visited the Aloha Hotel or the Absolute so I’ll save those two hostels for another post.
Hostel Photos
Three Ducks Hotel 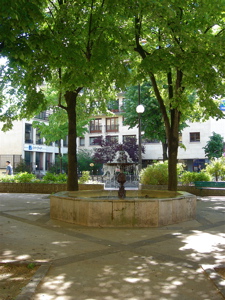 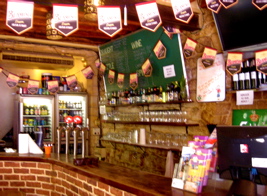 3 Ducks Bar – this is a very comfortable place to sit – you may never get around to seeing the Eiffel Tower and Mona WHO? 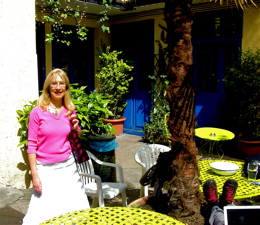 The only reason I’m in this picture is because all the other women ran in five separate directions to avoid having their picture taken – such a shy lot! But, all very pretty. 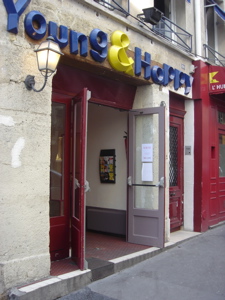 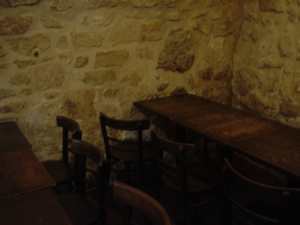 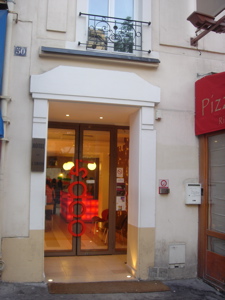 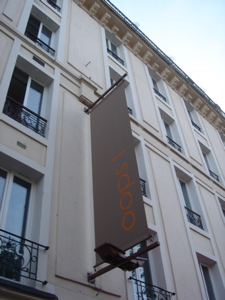 OOPS!
>> More general information about hostels and booking a hostel in Paris