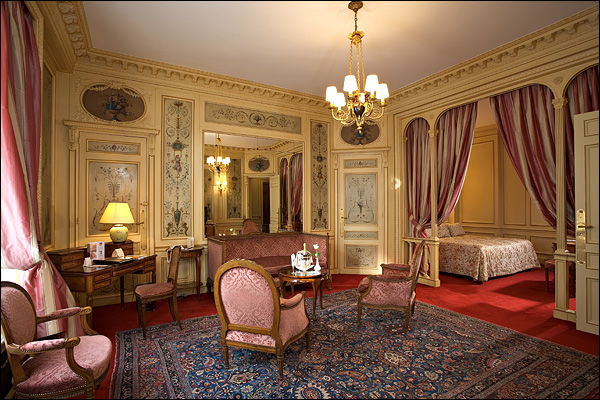 Few of us can afford the mind-boggling hotel rates starting at $775 (490 Euros) for a basic room at the Hotel Raphael – and capping at just under $9,500 (6000 Euros) for the best suite. But we can dream. Or you can see the short film ‘Hotel Chevalier’ which is the R-rated opening short for the “Darjeeling Limited.”
Even though I’ve never set foot in the Hotel Raphael, I sensed immediately that the invented ‘Hotel Chevalier’ was actually the Hotel Raphael (noted in the credits). If your wedding plans do allow for such a splurge, you might want to see this short film to get the full impact of spending a few days in most romantic setting.
Needless to say the arrival of Natalie Portman on the scene adds to the allure, but even before Portman’s arrival, hotel fans will love the traditional French furnishings and the ‘rechampi’ or intricately painted wall moldings.
If you’re interested in taking a peek at Hotel Raphael’s interiors, you can visit the Hotel Raphael’s website for their video walk-through, but I think the Hotel Chevalier probably does a better job of capturing the ‘romance’ mixed with a little sense of the practical.
First thing Portman says after she walks through the door – how much did you spend for this anyhow? Regarding the Hotel Chevalier, you can visit the official website but I also noticed legroom.fr that shows more of Portman than the interior of the hotel (nudity included) please DO NOT visit this sight if you find nudity to be offensive).
For those of us mere mortals that have budgets to manage, might I suggest an equally romantic Right Bank hotel, the Hotel Chopin which is located right next to the Musee Grevin wax museum in one of Paris’s historic passages?
The reviews I’ve seen regarding the Hotel Chopin46 Passage Jouffroy look very positive. At $145, (or 65 to 75 Euros) this price for a honeymoon hotel in Paris seems much more accessible. The one negative about this hotel was suggested by a reviewer at Trip Advisor. Do not come here with tons of luggage. You will need to walk through the pedestrian only passage to access this hotel.
Housed in this 19th century passage, you will feel transported to a time-period when the passages were the major shopping venues for Paris’s beautiful people. Passage Jouffroy will also be a favorite spot for collectors. Old movie posters, the famous collector’s toy shop, Le Pain d’Epice, and of course, The Musee Grevin wax museum are right at your doorstep. You won’t even have to get your feet wet (which was the original concept of the passage construction).
Hotel Raphael
17 Avenue Kleber
Metro: Charles de Gaule Etoile
75116
Hotel Chopin (2-star)
46 Passage Jouffroy
10 Blvd. Montmartre
Metro: Grand Boulevards 75009
Looking for more advice on Paris hotels? E-mail Parislogue.