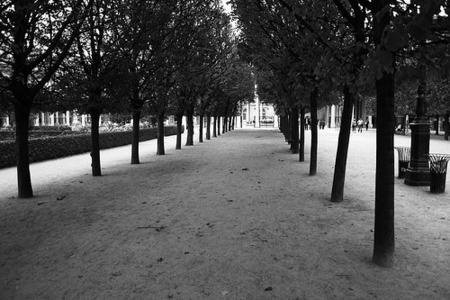 In a city as well-loved and heavily trodden as Paris, you’d think every little nook and cranny had been discovered and exploited already. And to a large extent, this is true – there are few truly “hidden gems” in Paris anymore, as you’ll discover just by searching that phrase on the interwebs. Everyone and their frère has written about hidden Paris, and those lists have a tendency to sound quite similar after awhile.

So what am I doing writing another hidden Paris list?

Well, after perusing several of these lists myself, I realized that many of them are located in spots that most tourists don’t go. Should you go out of your way to find hidden Paris sights? You certainly can, but in a city the size of Paris, I just think you shouldn’t have to. There may not be any undiscovered gems left in Paris, but there are certainly museums that very few people visit, gardens that are haunted only by a smattering of locals, and unexpected treasures that dot the city like so many Easter eggs.

Here, then, is my guide to the easily reached hidden sights of Paris.

Statues of Liberty in Paris: Can you find them all? 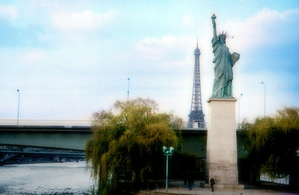 Many people know that the famous Statue of Liberty which graces New York’s harbor was a gift from France, and some visitors in Paris may know that there’s an exact model in the Luxembourg Gardens. But you might not know that there are two more Statues of Liberty in Paris, plus a life-size model of her finger and the torch. Finding all the liberty ladies in Paris is a fun scavenger hunt for kids of all ages.

In addition to the bronze model in the Jardin du Luxembourg (which was the first model used in designing the statue which was sent to New York), there’s a 37-foot-high Lady Liberty near the Grenelle Bridge on the Ile des Cygnes. For the life-size copy of the torch, you’ll need to find the Pont de l’Alma tunnel near the Champs-Elysees. This tunnel also happens to be the one in which Princess Diana died, so the torch at the entrance isn’t the only reason people snap photos (in fact, most probably ignore the torch altogether). 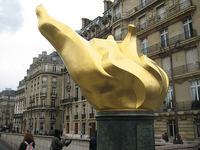 To find the last Statue of Liberty in Paris – and her life-size finger – you’ll need to pay a visit to the Musee des Arts et Metiers, Paris’ museum of science and industry. One of the museum’s displays shows the progression of the statue’s design and includes a 9-foot model of the final product. This scale model was used to design the one which stands in New York today.

>> The duplicate statue is in the Luxembourg Gardens, the Grenelle Bridge is here, the Pont de l’Alma is here, and the official website of the Musee des Arts et Metiers (in the 3rd arrondissement) is here. 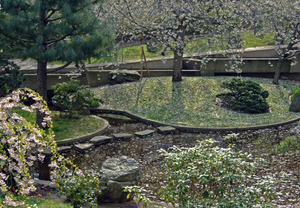 UNESCO’s garden is a Japanese-style garden with a twist; whereas a traditional Japanese garden can’t be viewed in its entirety from any one viewpoint, the UNESCO Garden of Peace can – the upper garden has a platform from which you can survey the entire thing. But one of the things that makes this garden really special and worth visiting is what’s known as the “Nagasaki Angel.”

This stone angel was plucked from the bombed ruins of Nagasaki as the rubble was cleared in 1945, having once adorned the face of the Urakami Church in that city. In fact, this small stone fragment was the only thing that was left of the church after the atomic bomb was dropped, and was seen as a sign of hope when it was uncovered. The angel was presented as a gift to UNESCO in 1976 by the city of Nagasaki and placed in the Japanese Garden of Peace.

>> UNESCO World Headquarters is at 7 Place de Fontenoy in the 7th arrondissement, near the Eiffel Tower. You can learn about planning a visit to UNESCO on their official site, and the garden’s main site is here. 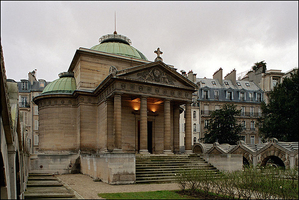 Of the nearly countless churches and chapels in Paris, many of which are worth visiting and definitely fall in the “must-see” category, the Chapelle Expiatoire is one that’s overlooked and quite interesting. It was ordered built in the early 19th century by King Louis 18th in an area of the Madeleine Cemetery where King Louis 16th and Queen Marie-Antoinette had been buried in a mass grave in 1793.

The beheaded members of the royal family were exhumed in 1815 after the land they were buried in was bought and cared for by a royalist magistrate. The remains were identified (albeit by dubious means), and moved to the royal French mausoleum at Saint-Denis. So although the king and queen are no longer buried here, the Chapelle Expiatoire is a lasting reminder of this plots former inhabitants. Today, the remains of 3,000 people who died during the French Revolution are entombed here.

>> The Chapelle Expiatoire is in the 8th arrondissement at 29 rue Pasquier. The official website is here, and is where you’ll find information about how to get there along with hours and admission prices.

Le Musee du Vin: You’re Gonna Drink It, Might As Well Learn About It 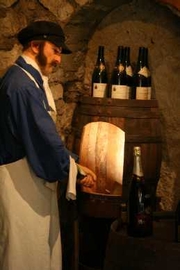 In a country so dedicated to wine, it only makes sense that there would be a museum dedicated to wine, right? Well, you’re in luck, because Paris’ Musee du Vin is just that. The museum opened in 1984 and has displays showcasing the history of and techniques involved in French winemaking. But, not content with just talking about and showing off French wines, the museum is also a restaurant and tasting room.

Housed in the former cellars of the Passy Abbey, dating from the 14th century, the displays are those fun old-school sort with wax models, but the whole thing is educational and interesting (if you’re into wine, that is). You may want to time your visit such that the restaurant is open and – even better – if there’s a wine tasting class going on, but even if there isn’t you’ll get one glass of wine with your entry ticket.

>> The Musee du Vin is in the 16th arrondissement at 5 Square C. Dickens, at one end of the Bir-Hakeim Bridge on the other side of the river from the Eiffel Tower. You’ll find information about visiting the museum, as well as a schedule for wine tastings and the restaurant’s menu, on the museum’s official website.

The Passer Through Walls: Whimsical Sculpture is Always a Crowd Pleaser 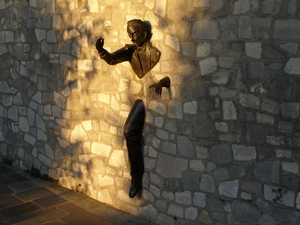 Anyone who’s visited Pere Lachaise Cemetery in Paris and seen the array of interesting sculptural tombs on display there may not be surprised to find a bit of sculptural whimsy in Montmartre as well, but if you’re not expecting it then it may just startle you – especially if it’s dark and you’ve spent too much time wine-tasting at the Musee du Vin.

Parisian writer Marcel Aymé lived in Montmartre, and when he died he was immortalized with a bit of artwork not far from his former home which recalled one of his more famous stories. “Le Passe-Muraille” roughly translates as “the walker through walls,” and was a short story about a man who discovers in mid-life that he can pass through walls. The sculptural memorial is of a man’s torso, leg and arms coming through a wall – as if he were walking right through it.

If Le Passe-Muraille makes you smile and you’d like to pay your respects at Aymé’s grave, he’s buried in the Cimitiere Saint-Vincent in Montmartre.

>> The Passe-Muraille sculpture is in the fittingly-named Place Marcel-Aymé in Montmartre in the 18th arrondissement, at the corner of Rue Norvins and Allee des Brouillards.

Georges Fouquet Jewelry Store: The Face of the Belle Epoque 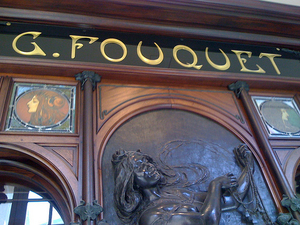 Inside the Carnavalet Museum in Paris (which is itself under-appreciated), a museum dedicated to the history of Paris, you’ll find plenty of things to interest and entertain – from Marcel Proust’s bed to Napoleon’s toiletry case – but if you’re at all interested in the artistic movement known as Art Nouveau you’ll want to make a special point of taking in the Georges Fouquet jewelry shop, the entirety of which is now preserved inside the museum.

Alphonse Mucha, single-handedly responsible for creating the style we call Art Nouveau, designed this jewelry shop in 1901 and it’s absolutely covered in his signature flowing lines and stained-glass portraits of beautiful elongated women. This organic style epitomized what we now call the Belle Epoque, and the Musee Carnavalet has several rooms showcasing the best of the Belle Epoque which you can enjoy – but the jewelry shop is simply a stunner.

One can only imagine what it must have been like browsing for and purchasing jewelry in this store at one time. To shop for jewelry inside a jewel? How lovely.

>> The Musee Carnavalet is in The Marais, not far from the Place des Vosges, in the 3rd arrondissement at 23 rue de Sevigne. The museum’s official website is here, all in French, but you’ll find visitor’s information on this site. 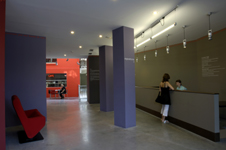 Paris is a city of art galleries and art museums, so putting an art gallery on a list of “hidden Paris attractions” might seem like a bit of a stretch. But hear me out. La Maison Rouge, or The Red House, is a gallery dedicated entirely to contemporary art and specializes in temporary shows of artwork that is otherwise sequestered in private collections. So in addition to the regular shows which you can see at La Maison Rouge, depending on when you visit you may be able to catch something that isn’t typically seen by public eyes.

Established in 2000 by a former gallery owner, La Maison Rouge is a foundation to promote contemporary art, but it takes its name from the actual red house that’s at the heart of the gallery space. There are four gallery areas which surround the little red house at its center, which is entirely enclosed by the foundation’s new building. Unlike most art galleries, this one charges an admission fee (it supports the foundation), so you’d better like art if you’re going to tick this one off your list.

If you do decide to go, note that there’s a small cafe and an excellent bookstore on site (which is helpful if you’re looking for information about the art on display – decidedly absent on the gallery walls).

>> La Maison Rouge is near the Place de la Bastille in the 12th arrondissement. You’ll find visitor’s information on the “practical” link on the official website. 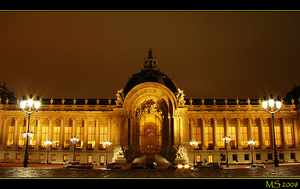 Back when the world was disconnected enough that we needed things like World Fairs, Le Petit Palais (the Small Palace) was built for the Universal Exposition in 1900. The building itself is considered an architectural jewel, and it’s been used as the inspiration for buildings elsewhere in the world – including a Royal museum in Brussels and a fine arts museum in Santiago.

Today, the Petit Palais houses a city museum dedicated to fine arts (the Musee des Beaux-Arts de la Ville de Paris). The permanent collection was bequeathed to the museum by one family, and includes French and Italian Renaissance paintings, medieval paintings, and rare French manuscripts. The family also left a fund to purchase further items for the museum, so the collection has expanded greatly since 1900.

In addition to the museum’s collection and the ornate architecture of the building itself, you can also enjoy the Palais’ pretty garden and courtyard. And the whole thing is completely free to visit. (Well, special exhibits will cost you a little, but the permanent collection and the garden is free.)

>> The Petit Palais is near the Champs-Elysees in the 8th arrondissement on the Avenue Winston Churchill, not far from the Grand Palais. You’ll find information about visiting the Petit Palais here, although it’s all in French.