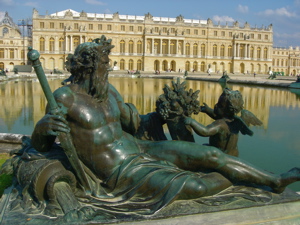 Known to many as the ‘Sun King’ Louis XIV’s gilded 17th-century palace, the ultimate example of royal luxury, Versailles served initially as a country lodging for R&R, primarily hunting – but also as the lieu where Louis’ father, Louis XIII enjoyed a ‘bachelor’s pad’ far from the queen’s eye. This tradition was passed along from generation to generation, in spite of the fact that Louis XIV moved his entire court from Paris to Versailles. He simply packed up his queen, his courtiers, – and his mistresses. 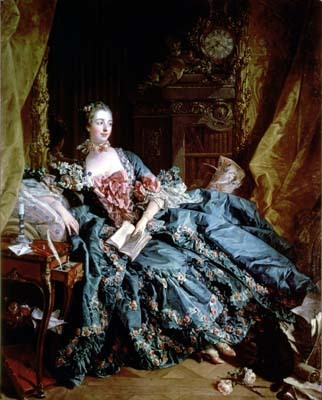 With plenty of secret passageways, slipping out of the king’s chambers to pay his kind attentions to the ‘flavor of the month’ was convenient enough when one considers that the Versailles palace had 1,852 individual apartments to put up a bevy of permanent house guests. Mistresses had their separate apartments within easy access – and the more popular a mistress, the better rooms she received on a higher floor. 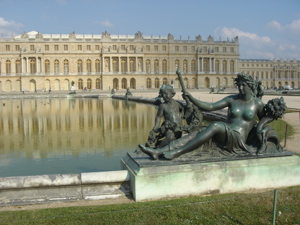 But the best of fun was to be had far from the palace itself once Louis XIV decided to buy up a whole town called Trianon. After purchasing the village, he leveled it to construct his intimate love nest – the Porcelain Trianon, which he designed with his architect Le Vau to evoke a Chinese porcelain palace. Originally, the Trianon was designed to be covered with blue and white porcelain tiles.

According to James Barter’s Palace of Versailles: “Louis became so enamored with Chinese art and architecture that he sometimes compared himself to a Chinese emperor.” Over one million plants at one time decorated this love nest where an invitation to dinner from the king might well end up in an overnight frolic. Whereas the main palace at Versailles was the lieu for extravaganzas, the Grand Trianon became the king’s ‘home away from home’, the place where parties were held for his intimates.

Just as Louis was fickle with his mistresses, so was he with his building ventures. Only seventeen years after completing his porcelain trianon, he replaced the ‘bijou’ with a ‘bigger and better’ palace constructed in the sober neoclassic style including peristyles made of the best French marble. (This is the Grand Trianon you’ll see today!).

Nevertheless, this simple square structure which could be compared to a huge chocolate box has some admirable features, and according to author Barter, tends to be more highly respected by architects. Aside from its pleasing proportions, some of its gimmicks included a dining table that could literally be lowered from the second floor down to the kitchen level to be loaded up with food and lifted with a pulley system to the dining room (almost like props for a stage set) make the Petit Trianon an innovative concept in house design. Maybe a good idea for your new dining room too? Sure beats using a trolley.

When one reads all the attention that these kings (and their mistresses) took in building these ‘homes away from home’, you may want to take the extra time to explore beyond the main Versailles chateau Once again, reading accounts of palace life, or the biographies of its residents – such as Nancy Mitford’s biography of Madame Pompadour will give you a glimpse of life in the gilded age.

Hanky panky at Versailles included plenty of parties – at least three per week, intimate dinners with the king (just for the ladies), and heaven help the women who didn’t plan ahead to bring a servant to help her get redressed at the end of the night (in one account, a woman is left entirely helpless because she can’t find a single soul to help her get dressed to go home. Yes, women literally did not know how to dress themselves – or were physically unable to do so – ever try hooking a bustier fast?

Nowadays, when you visit the Petit and Grands Trianons, their stately furnishings probably bring to mind more recent history. In the 1960s Charles de Gaulle invited visiting dignitaries to reside in the Grand Trianon. One might easily forget the wilder party aspect of the Trianons. Did the courtiers have more fun in Louis’s day? What do you think?

If you decide to visit both Trianons, you can purchase a Day Pass (25 Euros high season, or 16 Euros low season) which includes admission to the main palace as well the ‘Marie Antoinette Estate which encompasses the Trianons and her make-believe village called the ‘Hameau’. However, be prepared to walk a half hour minimum from the main palace, through the gardens, to the Trianons. Be sure to carry your garden plan map. Take the mini train if you have difficulty walking long distances or if the weather is inclement. I would suggest stopping for a snack or lunch at one of the cafes near the Grand Canal to break up a morning visit to the main palace followed by the Trianons in the afternoon.

If you’re a fan of the Napoleonic era, you will want to visit the Grand Trianon which includes decor similar to what Napoleon would have liked in the Trianon where he also resided. (The green walls in one bedroom were said to have been purposely laced with arsenic) according to one tour guide.

Relive the nostalgia of Versailles!

>> Map of Versailles Gardens & the Trianons

The Grand Trianon opens for visits at 12 noon.

Note: The Petit Trianon was closed until recently for renovations. Reopening has been scheduled for September, 2008.

Also, keep in mind that the Opera House at the Chateau de Versailles will not be reopened until 2009.