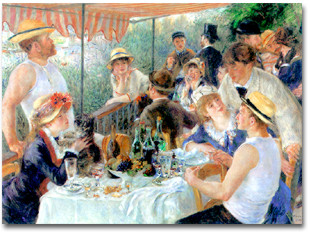 It’s a sun-drenched weekend in Paris – and you’d really like to get out of town, but you don’t want to get stuck in a traffic jam for hours. You don’t need to go very far – and best of all – if you stay close Paris’s riverlife, you might rediscover the Paris of yesteryear has not completely disappeared.
We heard about Chez Gegene, one of the few remaining guinguettes from the bartender at our hotel bar The Orleans Palace near Metro: Porte d’Orleans in the 14h.

The bartender, Eric, jotted down the name Chez Gegene and said, “if you want to go some place really ‘Parisian’, this is it.”

To begin with a ‘guinguette’ is an cafe/dance hall associated very much with river life. Sundays, riverboat people spent their day off alongside the river where they picnicked, drank wine, and danced. The reason they congregated just outiside the city limits was to avoid a liquor tax.

‘Guinguettes’ reached their zenith in the 19th century and into the Belle Epoque, but the two World Wars and German occupation put a damper on the Sunday gatherings. Even though Chez Gegene stayed open during WWII for example, there was no dancing (according to Mary Blume’s 2003 IHT article.…)

We arrived at Chez Gegene about 12 noon. You want to get there early if you’re looking for a table on the terrace which overlooks the Marne River. What surprised was the fact that on this particular afternoon, we seemed to be the only foreigners. A man sitting across from us looked over and then asked, “Well, excuse me for asking, but how did you FIND this place?”

Actually, Chez Gegene is one of the two most well-known guinguettes aboard the Marne and after reading Annabel Simms review of the Guinguette Auvergnate at Choisy le Roi, I’d be eager to compare the two locales.

At Chez Gegene, you can either come just for the dancing which starts off with some of the traditional style tangos, paso doble, waltzes, etc or you can have Sunday lunch, or you can just order a plate of the tiny fried fish which is the local specialty. That’s what the curious Parisian suggested when he saw us looking at the menu.
if you choose to come just for the music, normally the dancing starts around 3pm and continues until 7 pm. Or you can attend the Saturday night ‘bal’ which begins at 9:30 pm until the wee hours.

The ambiance continues to remain Paris working class. Women put on their dancing shoes and you should wear your Sunday best. If you’re looking for first class cuisine and top drawer wines, you’re in the wrong place.
Some will say that Chez Gegene is overpriced and kitschy. I would tend to agree with both of these comments, however the fact that it’s a landmark and has remained with the same family for years must mean that they’re doing something right.

We returned to Chez Gegene for a second meal and brought a group of friends from Normandy along with us. We danced, drank wine and ate some more fried fish. Annabel Simms mentioned in her article the feeling of stumbling into the middle of a Renoir painting and I heartily agree.

Whether you’re on the Marne or the Seine, once you get outside of the Paris city limits, the river seems to sparkle in a totally different way. On Sundays, people stroll along the riverfront at a more leisurely and less self-conscious way.

We’re part of a lovely picture – lost in time for a day.