Guide to Taking Taxis in Paris 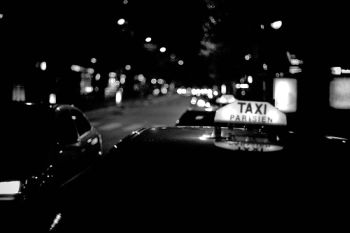 While most people in Paris – locals and visitors alike – seem to favor taking public transportation like the cheap and efficient Paris Metro for getting around in Paris, for some trips taking a taxi can be a decent option. It’s almost never going to be the most budget-friendly option, but if budget isn’t your primary concern then zipping across town in a taxi may be preferable to waiting for a bus or figuring out the Metro map.
But if you’re not used to the taxis in Paris, you might not know how to go about hailing a cab, how to schedule one for a particular time, or even how to know if a taxi you see driving down the street is available. So here’s what you need to know about Paris taxis.

How to Tell if a Taxi in Paris is Licensed

Taxis in Paris aren’t uniformly one color, so it won’t do to turn away any taxi that isn’t the same color as the first one you rode in. You do need to make sure the taxi you’re about to get in is licensed, however, because un-licensed taxis are illegal and therefore unregulated – and that means they’re not only more likely to rip you off, you’re also not going to get any sympathy from the authorities if you do get ripped off.
So, how do you know if a taxi is licensed and official? An official Paris taxi must have all of the following things:

How to Tell if a Paris Taxi is Available 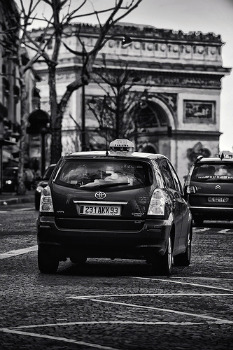 Like taxis in just about any other city, taxis in Paris have a sign on the top that can be lit up. If the light inside the taxi sign is on, the taxi is free and you can hail that cab. If the light is off and one of the three small light bulbs underneath the big taxi sign are on, that taxi already has someone in it and it’s not available.

How to Hail a Taxi in Paris

Technically, you can hail a taxi in Paris, just as you can on the streets of New York. But in Paris, you’re much more likely to get frustrated by trying to hail a cab – either because every taxi that passes is already full, or because they just won’t stop for you. Why aren’t they stopping? It could be a couple of things.
First, there are official taxi stands throughout Paris – sometimes known as “taxi ranks.” If you’re within roughly 50 meters of a taxi stand, a taxi driving by isn’t legally allowed to stop for you – instead, you have to go to the taxi stand and wait in line (if there is one) to get in the first available cab there. As a visitor, you may not realize there’s a taxi stand nearby, but if taxis are driving by without stopping and their taxi signs are lit up, you may want to start looking around for a taxi stand.
>> You’ll find a list of all the taxi stands organized by arrondissement on this page, along with a phone number for each one.
Another reason taxis may seem to be ignoring you, however, has nothing to do with the law and everything to do with what drivers perceive as an inconvenience. If you’re in a large group or you’ve got lots of luggage (and you didn’t specifically call a taxi or have one called from your hotel), a driver may just think that’s too much trouble and keep right on going.

Calling for a Taxi in Paris

Since attempting to hail a taxi on the street or finding a taxi stand (where, it has to be said, there are often no taxis waiting!) offer inconsistent results, the best way to get a taxi in Paris is to call one. You can call an individual company, or use the all-purpose number: 01 45 30 30 30.
The major taxi companies in Paris are:

One thing that’s important to know is that when you call a taxi, the meter starts running from the moment they set off to pick you up – not from the moment you get in the taxi. So when you get in the cab, the meter will already be ticking away and is likely to have a nice sum already on it. Don’t assume the driver’s trying to rip you off – this is standard operating procedure in Paris. The fact that the fare seems ridiculously high for a trip that took 10 minutes or less is perhaps irritating, but it’s unfortunately normal.
For this reason, it can be a good idea to call the specific taxi stand that’s closest to where you are, rather than the main number of a taxi company. A list of all the taxi ranks in Paris – including each phone number – is on this page, broken down by arrondissement.

How to Pay for a Taxi in Paris 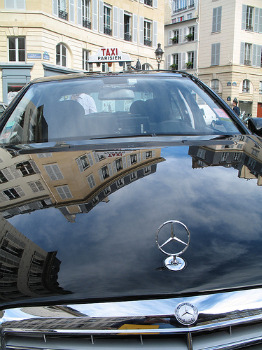 The vast majority of the time, you’ll pay for your taxi ride in Paris with cash. If you know in advance that you’ll need to use a credit card to pay for your taxi, you need to make sure before you get in the cab that it’s equipped to accept credit cards. Additionally, the total amount of the fare has to be €15 or more. So for a short trip in the city, make sure you have enough cash on you – or take the Metro.
>> Learn more about tipping taxi drivers in Paris

There are some basic charges associated with a taxi ride in Paris, but there isn’t one base fare because the rate you’ll be charged depends partly on where you are in the city and when you’re taking the taxi ride. But here are some of the basic charges:

As you’ve read above, there are three light bulbs underneath the “Taxi Parisien” sign atop each taxi – these lights represent the three different fare rates you can be charged. All you need to pay attention to is whether one of those bulbs is lit up, meaning the taxi is occupied, but the lights correspond to an A, B, or C rate that’s the same for all licensed taxis in Paris. Here’s a brief outline of when/where each of the rates is applicable, and what the per-kilometer fare is for each.

Note that there aren’t “fixed fares” between any of the Paris airports and Paris.
>> Rick Steves has a very cool “Paris taxi tour” that, if you’re interested and you find an amiable taxi driver, can be a fun and reasonably priced way to see the city – especially if there are 2-3 people in your group.
photos, top to bottom, by: Jose Goulao, roger.salz, denn