Guide to RER Trains in Paris 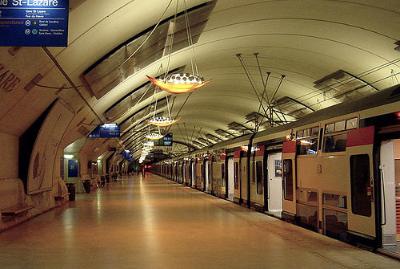 Anyone who’s heading for Paris with an ounce of preparation (or, at the very least, a good guidebook for in-flight reading) will know that this city has one of the best underground transportation systems anywhere. The Paris Metro, the subway system, snakes its way all over the central part of the city and well beyond, making getting from your hotel in Paris to the Eiffel Tower a simple task. But the city didn’t stop with the Metro when it comes to great public transport – there’s also the efficient RER train system in Paris.

Not familiar with the RER train network? I don’t blame you. The Metro makes it so easy to get around the city that there’s basically no incentive to figure out things like the bus lines in Paris. But the RER is so easy to use, and so well-integrated with the Metro, that it’s not a bad idea to get acquainted with it so that you can make getting around the City of Lights even quicker and easier.

Tourists in Paris may think they have no cause to figure out the RER lines so long as they’re sticking to the main tourist sights. But here are a few reasons you’ll want to pay attention to the RER lines, too – there’s an RER into Paris from Charles de Gaulle Airport or Orly Airport, and you can take the RER from Paris to Versailles or Disneyland Paris. See? The RER can definitely be a tourist’s friend in Paris.

RER stands for “Réseau Express Régional,” which translates to “Regional Express Network.” Whereas the Metro has 16 lines, the RER has only five. The Metro’s lines are numbered, and the RER lines are represented by letters – so it’s easy to know immediately which kind of transit system you’re heading for. Because the RER serves both the Paris city center and its suburbs and is therefore popular as a commuter rail network, there are lots of places where it intersects with the Metro network as well as the SNCF rail stations in Paris for easy transfers.

The five lines of the RER are, as mentioned, designated by letters – they are lines A, B, C, D, and E. Lines A and B are the busiest, as they connect the Paris city center with EuroDisney, CDG Airport, and Orly Airport, but there are more than thirty RER stops in Paris.

On this map of the central RER network, you can see each of the five lines running through well-known parts of Paris: 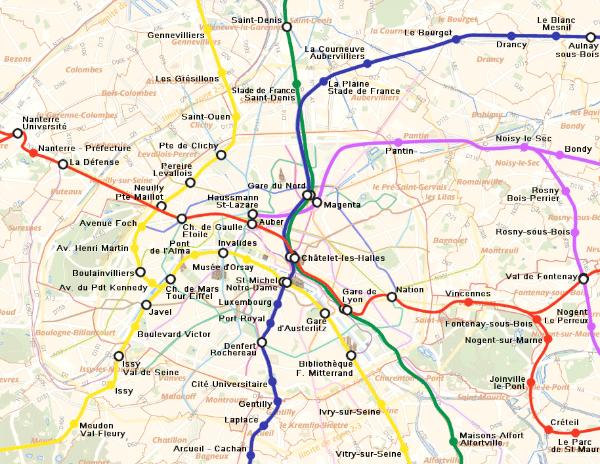 On this map of the Paris region, you can see how the RER lines extend well beyond the central part of the city: 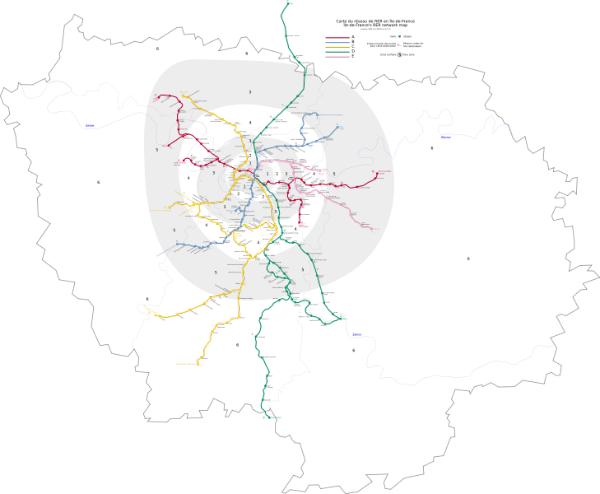 >> For an RER map you can actually use without a magnifying glass, see the official RATP website which has a great map here. 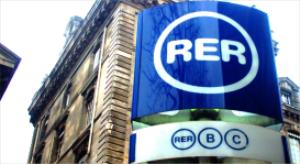 Because of these intersections, there are some stations in Paris through which you can board Metro, RER, or SNCF trains – and some which are dedicated to one type of train or another. You’ll be able to tell the which ones are RER stations because of the big blue signs with “RER” in white letters in the center. Underneath the big “RER” sign there’s a smaller one that tells you specifically which of the five RER lines stops at that station.

The main RER stations in Paris which you are likely to make use of during your visit include Charles de Gaulle-Etoile, La Defense, Chatelet-Les Halles, and Gare de Lyon (RER A); Gare du Nord (RER B, C, & D); and Haussman-Saint-Lazare (RER E).

Tickets for the RER

To use the RER trains in Paris, you’ll first need to buy a ticket. The good news is that if you’re already riding the Metro, you already know what the tickets look like! Yes, the Metro tickets you’ve been buying and using are the same ones you’ll need to ride the RER – provided that you’re staying within the city center. If you’re heading outside the city center, you’ll need to get a different ticket – the cost of those tickets depends on how far you’re traveling.

For zones 1-2, or the city center (the same area covered by the Metro), one RER ticket, called a “T+ Ticket,” will cost you €1.70 (or you can buy a “carnet” of 10 tickets for €12.00). There are vending machines in RER and Metro stations where you can buy tickets, or you can buy them from a ticket window if you find one that’s open and without a line. When you go through the turnstile with your ticket, it gets stamped with a date and time – and that ticket is valid for 1.5 hours from when you get it stamped. This means you can either ride around on the RER and Metro for an hour and a half, or you can continue your trip on a bus or tram after leaving the underground. You can’t leave the underground and then go back into another Metro or RER station on one ticket, however, so be sure you’re done with your journey before you leave the station!

If you’ll be traveling beyond the city center – beyond zones 1-2 – you’ll need to buy a ticket specific to your trip. You can do this either at the ticket window or from the vending machines; they allow you to pick your language, so you don’t have to know French in order to buy a train ticket! Do note that the vending machines are designed to accept only credit cards with those “smart” chips in them – so if your card doesn’t work and you think you’re doing everything right, it probably means your card isn’t 21st century enough and you’ll need to buy your tickets from an actual human being at the ticket window.

For those of you who thought ahead and bought a Paris Visite travel card or a Mobilis card, you’ll need to figure out which zones of the RER are covered on the card you bought. As long as you stay within those zones, you won’t need to buy a separate RER ticket – but if you want to travel beyond the zones on your card, you’ll need to pay a supplement. Show your card to the person at the ticket window and they’ll be able to tell you what else you need to purchase.

No matter what kind of ticket you have, remember to hang onto it until you’ve completed your journey – you’ll need it to get through the exit turnstiles!

Other articles to help you figure out getting around Paris: