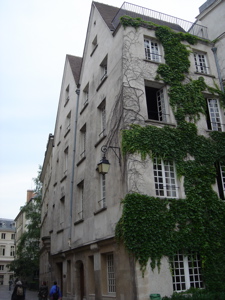 If your gut instinct tells you that hostels are bound to be in Paris’s seediest neighborhoods, far from tourist attractions, I’m happy to report that some of Paris’s most pleasant youth hostels are smack in the middle of Paris’s medieval core.
MIJE youth hostels
MIJE or La Maison Internationale de Jeunesse et Etudiants was created in 1958 to provide inexpensive city lodging for student groups and individuals. Its three locations in the Marais district (Right Bank) are housed in 17th-century aristocratic townhouses:

Prices
Starting at 29 Euros per person (current rate for 2008) for a dorm (4 to 10 people), 30 Euros per person for a triple room up to 47 Euros per person for a single and 68 Euros per room for a double, the rates include breakfast. There’s also a restaurant on the premises (only at the Hotel Fourcy site) for a lunch and dinner at reasonable rates.
With the exception of the month of August, you cannot book your rooms earlier than 45 days in advance. Rooms for August can be booked six months in advance.
Parislogue review
I dropped in at the Maubuisson address: the ‘hotel particulier’ or townhouse at 12 Rue des Barres, Metro: Hotel de Ville. You couldn’t ask for a better location. Tucked behind Eglise St. Gervais, one of Paris’s oldest churches (St. Germain-des-Prés on the Left Bank is most often considered the oldest), you can easily walk from here to the trendier sections of the Marais such as Place des Vosges, Rue de Rosiers, or cross over to Centre Pompidou. The adjacent Rue Francois Miron used to be a major west-east Roman thoroughfare connecting Paris to Sens.
At Hotel Maubuisson, you’re almost spitting distance from the Seine River. Take Louis Philippe or Pont Marie bridges if you want to stroll around Ile de la Cite and Ile St. Louis for a visit to Notre Dame de Paris.
There’s only one negative about the MIJE hostels. You can’t stay here forever. There’s a 7-consecutive day maximum stay limit.
If you’re heart is set on staying in Paris’s student district – the Latin Quarter or some of the hostels most popular with backpackers, here are some more listings for hostels and budget hotels in Paris’s other arrondissements: Paris Hostels
>> More info on Paris hostels