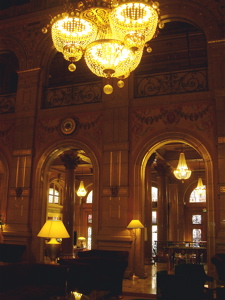 If you love taking trains, you may not always love the idea of searching for a hotel nowadays in the vicinity of train stations. In many cities ‘train station hotels’ have a negative connotation. Dingy is the first word that comes to find.
In Paris, you can still find one of the grand hotels that built its fame hand -in hand with the construction of the Gare St. Lazare train station.
Grand Hotel Terminus’s first stones were set in 1888. Known today as the Hotel Concorde Saint Lazare, its huge lobby has been designated a historic landmark of the Belle Epoque era – and in many ways you could call it an hommage to Gustave Eiffel and his Eiffel Tower. In fact, Gustave Eiffel himself announced the opening of the hotel from the top of his tower. It has been described as a ‘temple of opulence and innovation’. Meant to dazzle foreign visitors to Paris’s universal exhibitions, it succeeded, bringing Russian, English and Americans to marvel at its gadgetry and glamor. In its day, it was considered to be technological triumph with such magical accoutrements such as electric lights that could be dimmed. The hotel historic summary goes on to describe “The rooms were equipped with double doors allowing the valet to leave hot water without disturbing anyone and a box of surprises was often placed in the between the double walls along with letters, shoes, etc” Although these sort of amenities may no longer exist, the aura of the main lobby is no less grand than in those days.
Decorated with mosaics and pink Scottish granite columns, this is a place where you’ll want to just sit down and soak in the grandeur. The hotel history goes on to describe how this 500-room hotel differed from other hotels of its era. The Meurice and The Ritz hotel were truly designed to cater to an elite clientele that would not find it unusual to take complete apartments with two to five bedrooms. Two other Paris hotels more similar in concept to the Grand Hotel Terminus would be The Hotel du Louvre on Rue du Rivoli with its 750 beds and the Hotel Continental (now the Intercontinental).
For travelers coming and going from Normandy (and from the ferry boat service crossing the English Channel) this was a great convenience. You could walk across a bridge which linked the hotel to the train station. Guests didn’t even have to worry about getting their luggage transported from their room to their train compartments. Some even kept their winter clothes in storage at the hotel so they’d have everything at their fingertips.
Needless to say, the price of luxury hasn’t decreased over the years.
Be sure to ask about their Spring Package rate (if you’re booking in late February or early March which is currently posted (Spring ’08) starting at 172 Euros. Expect to pay higher prices than you would for the typical two or three-star hotel in the vicinity of a train station, but one of the benefits of being at this location is your access to one of Paris’s major shopping districts. You are just a few Metro stops away from the major department stores and shopping avenues such as Galeries Lafayette and Printemps.
If you are planning to spend anytime in Normandy, you’ll be right next to the train station that will get you there. This is a neighborhood where you should feel comfortable walking around during the daytime. You are not far from the Garnier Opera House if you’re an opera or ballet fan.
Like all train station neighborhoods, you still need to be aware that the crowds can always be magnets for pickpockets in and around the train station. However, the general ambiance is relaxed, especially off season.
Hotel Concorde-St. Lazare (formerly Grand Hotel Terminus) has 266 rooms, plus 40 suites and junior suites. Its presidential suite is called the ‘George Washington’.
Its Cafe Terminus restaurant has Belle Epoque decor and the ‘Golden Black bar’ offers a business breakfast from 7:30 to 10 am.