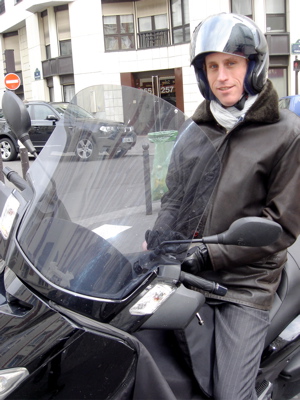 My friend at Amsterdam Logue laments the fact today that Amsterdam hasn’t made the list of Top 12 Places to see beautiful people. He also mentioned that he would argue the fact that Paris deserves its Trip Adviser rating as one of the top places to see beautiful people. So, I’m on a ‘crusade’ of sorts to track down the best neighborhoods in Paris to simply savor the delight of beauty in motion.
>> And don’t miss our tips on how to impress a French girl!
Until today, I would have agreed with my friend that generally speaking, I don’t find the Left Bank to be overrun with ‘beautiful people’ but today during my walk to a neighborhood butcher shop in the Val de Grace neighborhood, I met Cedric who was just in the process of parking his ‘moto’ when I asked if he’d agree to have his photo posted on this site as the ‘plus beau mec du quartier’.
Rue St. Jacques (Metro: Pont Royal RER) is the old Roman route which if you continue to follow its axis, will take you straight to Rome. (Rome was the other city listed as having the best-looking locals). One of the reasons you’re likely to find extremely attractive Parisians in the Val de Grace neighborhood is its proximity to the universities. Plenty of students live and work here, but natural beauty is one thing in life that really can’t be bought – Mother Nature sees fit to distribute her bounty to people of all races and all classes.
If you’re wondering if the Val-de-Grace neighborhood has attractive women as well – the answer is ‘yes’. The only reason there aren’t (as of yet) photos is your Parislogue reporter’s reticence to stop strangers (particularly women) in the streets of Paris. (Especially when I’ve forgotten my business cards!) However when the opportunity arises, I will definitely do my best to show why Paris deserves its rating as a city of ‘beautiful people’. My definition here being ‘natural beauty’, not the airbrushed formula served up for the ‘publicite’. 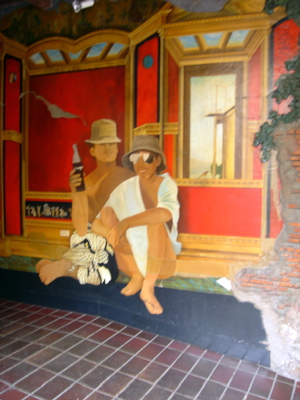 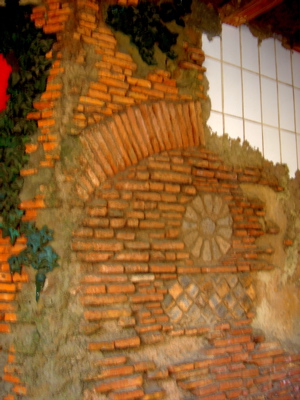 Begin your walk through the neighborhood at the Metro stop: Metro: Port Royal (RER) corner of Blvd. Montparnasse and Blvd. Port Royal. Walk three blocks over to Rue St. Jacques which runs parallel to Blvd. St. Michel. Continue walking on Rue St. Jacques to Pantheon and La Sorbonne. You’ll find plenty of good restaurants, bars, and cafes along Rue St. Jacques and some very attractive people. Bonne promenade!
By the way, another city that didn’t make that rating for 12 places for most beautiful people was Seoul, Korea. If you haven’t seen Seoul’s beautiful people, you should. Don’t bother asking to take photos of any of the women you should encounter there. They’ll tell you that ‘they’re busy’.
Look for more ‘random photos of Beautiful People’ in upcoming posts (as I meet Parisians who so kindly agree to spontaneous photos). Thanks, Cedric!
Photos: Modern frescos over
Remnants of old Paris
Having trouble posting a comment? E-mail me (in English or French)
photo at the top: Cedric, “Le plus beau mec du quartier,” by Chris Card Fuller 2008