Getting to Paris from Orly Airport (or vice versa) 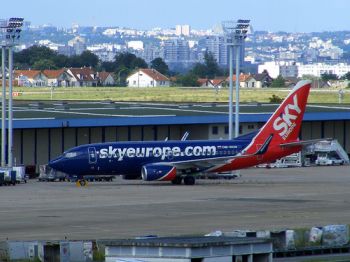 Although Paris’ Charles de Gaulle Airport has usurped the top spot in Paris (as well as France) in terms of giant international airports, Orly Airport (ORY) is still a popular international gateway for many travelers. And because Orly is actually closer to Paris’ city center than CDG, getting to Paris from Orly – or getting to Orly from Paris – is a quicker trip.
You have a few options for making the journey between Paris and Orly Airport, which you’ll find more information about below. Personally, I think taking public transportation is the easiest way to get back and forth, but even if you settle on that Paris still offers you a few choices. You’ll have to pick the best option for you based on your trip. And note that while I’ve listed the titles below as getting from Orly to Paris for when you first arrive in the city, the basic information will be the same if you’re in Paris and going back to Orly at the end of your trip. Ticket prices and travel times will be the same, it’s just departure times and stations for trains and buses that will be different.

Taking the RER Train from Orly Airport to Paris

The network of RER trains that covers Paris and the surrounding area stretches as far as both Charles de Gaulle Airport and Orly Airport – only at Orly you have to take a shuttle to get to the RER station (at CDG it’s right in the airport). Still, it’s a cheap and efficient means of getting back and forth between the airport and the city.
Both the RER B and the RER C trains connect Orly with Paris, and here are details about both:
Taking the RER B from Orly to Paris 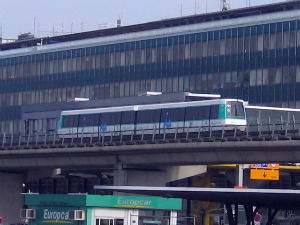 The RER B station near Orly is called Antony, and it’s connected to Orly by the Orlyval light rail train, which stops at both Orly’s South terminal and West terminal. Once at the Antony station, you’ll take the RER B trains in the direction of Vers Mitry-Claye or Charles de Gaulle. RER B trains stop at Saint-Michel-Notre-Dame, Chatelet-Les Halles, and Gare du Nord in Paris. If you’re coming from Paris, you can get a train bound for Antony (and Orly) at any one of those stations, and you want to look for trains that are going in the Saint-Remy-les-Chevreuse direction.
Orlyval trains leave Antony starting at 06:00 and run until 23:00, and going in the opposite direction they start at Orly’s South terminal at 06:00 and run until 23:00. The Orlyval trip between Orly and Antony station is less than 10 minutes, (trains come every 4-7 minutes), and the trip between Antony station and Paris is roughly 25 minutes. A one-way ticket between Paris and Antony station on the RER B is €9.30 for an adult, and €4.65 for children aged 4-10. A ticket on the Orlyval between Antony station and Orly is €7.20 for an adult, and €3.60 for children aged 4-10). If you have a Paris Visite card that’s good in zones 1-5, that will work on this route, too.
Taking the RER C from Orly to Paris 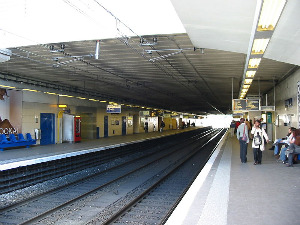 The RER C station near Orly is called Pont de Rungis-Aeroport d’Orly, and you get there from the Orly airport terminal by taking the ADP “Paris par le train” shuttle bus. Shuttles stop at Orly’s South terminal at entrance F, and at Orly’s West terminal at entrance G on the arrivals level. These trains make several stops in Paris, at Gare d’Austerlitz, Saint-Michel-Notre-Dame, and finally Invalides. From Paris, you can catch the train from any one of those stations, and the one you’re looking for is the Pont de Rungis-Aeroport d’Orly direction.
The first RER C trains from Orly start at 05:01 and the last train leaves Orly at 23:30. The first trains from Paris to Orly leave Invalides station at 05:40, and the last one leaves Invalides at 22:40. Trains come roughly every 20 minutes on weekdays, and from Orly to Gare d’Austerlitz is only a 25 minute journey. A one-way ticket costs €6 for an adult, €4.25 for a child aged 4-10. If you have a Paris Visite card that’s good in zones 1-5, that will work on this route, too.

Taking the Bus from Orly Airport to Paris

There are several bus options to get between Orly Airport and Paris, so I’m going to list them individually here. 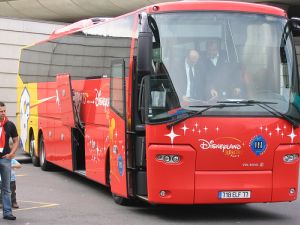 Air France’s Les Cars shuttles have three lines connecting Orly with Paris. Depending on the line you choose, you can connect with Paris’ Gare Montparnasse, Etoile or Invalides stations. There’s even a Les Cars shuttle that just runs back and forth between Orly Airport and Charles de Gaulle Airport. Prices range from €11.50-19.00 for a ticket.
>> More information about all the Air France Les Cars shuttles can be found by scrolling down on this page of the Orly website
Another company with service between Orly and Paris Disney is the VEA Shuttle company. They also connect with certain Paris hotels that are at the Disney resort. VEA Shuttles stop at Orly West (entrance C) and Orly South (bus station platform 2), and the trip takes about 45 minutes. Shuttles run every half-hour or so, and an adult ticket costs €17 (a child’s ticket, ages 3-11, is €13).
>> More information about the VEA Shuttles to Disneyland Paris can be found on the Orly website here

Taking a Taxi from Orly Airport to Paris 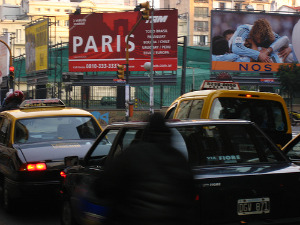 Although there isn’t a set of fixed price fares between Orly Airport and Paris like there is with some airports in big cities, the Orly website has published some “guideline fares” so that you can get an idea of what a basic trip will cost (barring excessive traffic, of course) before you call a cab. As you can imagine, it’s not a cheap ride – and be sure to scroll to the bottom of the page to see additional charges that can get added onto a regular fare for things like extra luggage or an after-hours trip.
There are taxi ranks at both Orly Sud and Orly Ouest, so you don’t have to schlep your stuff from one terminal to the other. One thing to keep an eye out for, however, is that there are two different kinds of taxis – there are Paris taxis, which just head into the city, and suburban taxis, which cover the outskirts of the city. To catch one of the Paris taxis you’ll go to Orly South exit M, or Orly West exit B (arrivals level).
>> More information about taking taxis between Orly and Paris is on the Orly website here

Driving from Orly Airport to Paris 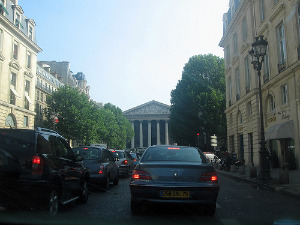 Generally speaking, unless you’re planning a trip to a bunch of places outside Paris but not actually going to spend much time in Paris, it’s easier to get around in the city by using public transit. But if your travel plans are to meander around the countryside, or you just really want to know what it’s like to drive around the Arc de Triomphe, then here’s what you need to know.
The Orly website has a tool that will help you figure out the best route to take – you plug in your destination address if you’re driving from Orly, or your departure address if you’re driving to Orly, and voila: driving directions straight from the Orly people.
Orly is off the A6 Autoroute. If you’re coming from Paris, pick up the A6 at the Porte d’Orleans exit on the peripherique, headed in the direction of Lyon.
Renting a Car at Orly Airport
There are many car rental companies at Orly, so you’ve got lots of choices. You’ll find information about all the companies that have desks at Orly on this page – be sure to look for the words “Paris Orly” under “Location” of each, because this list includes both Orly and Charles de Gaulle Airport.
photos, top to bottom, by slasher-fun, ArséniureDeGallium, Wikimedia commons, Hello Paris, alex-s, poeloq