Getting to Paris from Charles de Gaulle Airport (or vice versa) 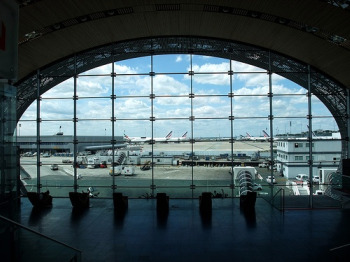 You may feel a sense of relief when you arrive at Charles de Gaulle Airport (CDG). You might think that you’ve arrived in Paris now, and you can start your vacation. But as soon as you realize what a huge airport CDG is, you’ll remember that your holiday doesn’t really begin until you get into the city – the airport doesn’t count.
Which means you need to figure out how to get from Charles de Gaulle Airport to Paris pronto.
Luckily you have a few options for making the trip from the airport into the city, each of which you’ll find outlined below. I happen to think that taking the RER train is the easiest transportation method connecting the two points, but you’ll definitely need to read through your options to make sure you’re picking the one that’s best suited to your trip.

Taking the RER from Charles de Gaulle Airport to Paris 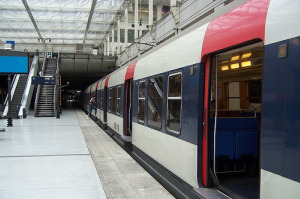 Because the general consensus is that for most travelers the RER train is the most convenient, quick, and cheap option for getting into Paris from CDG airport, we’ve got an entirely separate article on WhyGo Paris detailing how to make that trip. You’ll find all the details you need in that article, which is linked below – and the rest of your transport options are listed further down this page.
>> Read more about getting to Paris on the RER B from Charles de Gaulle Airport 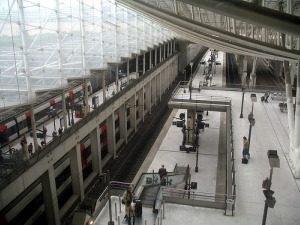 If your destination after you land at CDG Airport isn’t Paris, don’t worry – there’s a full train station right in the airport that’s connected to France’s intricate rail network and will take you anywhere in the country you want to go. Well, anywhere there’s a train station, that is.
The SNCF station is called Aéroport Charles de Gaulle 2 TGV and it’s in Terminal 2 of the airport. From this station you can get a TGV to several cities in France, including Bordeaux, Lyon, Marseille, Montpellier, Rennes, and Strasbourg. The ticket prices and schedules will vary, of course, depending on where you’re going, so it wouldn’t hurt to do a bit of research in advance. You can still wait until you get to the CDG train station to book your ticket if you like, but at least you’ll know ahead of time roughly how much it’ll cost and how long you’ll have to wait for a train.
>> Look up train schedules and ticket prices using the RailEurope site

Taking the Bus from Charles de Gaulle Airport to Paris 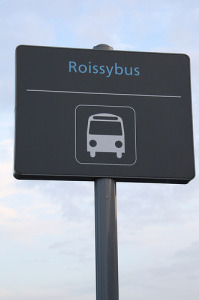 There are both coaches and buses that connect CDG Airport with the city of Paris, and as you might imagine the coaches are both more expensive and more comfortable.
Roissybus is a coach-like shuttle that runs between the Opera station in the Paris city center and the Charles de Gaulle Airport – it stops at seven different points at the airport, all at Terminal 2, so you’ll need to pay attention to which one is closest to where you want to go. The trip takes between 45 minutes to an hour and a ticket costs €9.10. Roissybus runs every 15-20 minutes between 06:00 and 23:00.
>> More information about the Roissybus schedule and stops can be found on the CDG website here.
Both the 350 and the 351 buses connect points in central Paris with CDG Airport as well. The 350 stops at Gare de l’Est, and the 351 at the Nation stop. At the airport, both buses stop at the same seven places – again, all at Terminal 2. The journey is about 45-60 minutes, and it will take three of the regular Paris Metro tickets to make the trip all the way from Paris to the airport (or vice versa).
>> More information about both bus schedules is on the CDG website – here’s the bus 350 information, and the bus 351 information; note that much of the information is in French only.

The Paris Shuttle company has regular service to all of Paris’ area airports, and luckily to/from CDG there are two Paris Shuttle options – a shared shuttle service (which is cheaper) and a private shuttle service (which is more expensive).
The prices to/from Paris are fixed when the Paris end of the route is a place with a zip code beginning with 75. The shared shuttle costs €27 for 1 person, €19 per person for a group of 2-3, €16 per person for a group of 4-5, etc. – in other words, the fuller the shared shuttle, the cheaper it is for everyone. A private Paris Shuttle transfer is priced per vehicle rather than per person, and ranges from €60 for 1-2 people to €100 for a group of 7-8 people.
Paris Shuttle also operates both shared and private coaches between CDG and Paris Disneyland. Again, shared shuttles are priced per person, and private shuttles are priced per vehicle. For a ticket on a shared Paris Shuttle from CDG to Paris Disney, it’s €60 for 1 person, €30 per person for 2 people, €25 per person for 3 people, etc., up to €12.50 per person for 8 people in the same shuttle. The private Paris Shuttles from CDG to Paris Disney cost €75 per vehicle for 1-2 people, €80 for a family of four, €90 for 5-6 people, etc.
>> More information about schedules and rates is online, plus you can book Paris Shuttle airport service online, too.
Air France has a shuttle service that runs from central Paris to Charles de Gaulle, too, and it’s not just for passengers on Air France flights. It’s called “Les Cars” and there are three lines that connect with CDG. Line 2 runs from the Etoile and Porte Maillot stops in central Paris, Line 4 runs from Gare de Lyon and Gare Montparnasse, and Line 3 runs back and forth between CDG and Orly Airport. Travel times and ticket prices vary depending on which line and route you’re on, and you can find out more about each line on the sites linked below.
>> More information about Les Cars line 2 (Etoile and Porte Maillot), Les Cars line 3 (CDG and Orly), and Les Cars line 4 (Gare de Lyon and Gare Montparnasse) is on this page of the CDG website.
Arriving at Charles de Gaulle Airport after hours? Then another option is to take the Noctilien Night Bus from the airport. The night bus stops at Gare de l’Est in Paris, along with a couple of other places depending on which bus line you’re on. (It’s Noctilien line 140 that goes to Gare de l’Est.) This bus stops at a few different points at CDG, including a stop at each of the three terminals, and the trip takes roughly 50 minutes. Ticket prices vary depending on where you’re going, but if you’re going all the way into Paris you’re likely to pay €6-8.
>> More information on the Noctilien Night Bus is on the CDG website.
Let’s say you’re headed straight for EuroDisney Paris rather than Paris itself – what then? If that’s the case, you can get a VEA Shuttle (that stands for Val d’Europe Airports) which provides regular service between Charles de Gaulle Airport and the Disneyland Paris resort. There are CDG stops for the VEA Shuttle at each of the three terminals, and the route includes stops at each of the Disney-area hotels. Tickets are €13 for kids ages 3-11 and €17 for adults.
>> More information on the VEA Shuttles can be found on the CDG website.

Taking a Taxi from Charles de Gaulle Airport to Paris 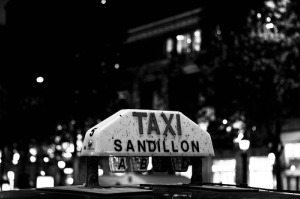 Charles de Gaulle Airport is located far enough from the city center of Paris that you would expect taxi fares to be on the high side. And they’re not cheap. But thankfully the CDG website has a list of “guideline fares” for most trips so you’ll have an idea of what to expect your fare to be depending on where you’re going. These aren’t fixed fares, and the website also lists some instances when the fare will be higher – for a particular time of day, or a day of the week – so pay attention to that information as well so you don’t accuse a taxi driver of over-charging you when they’re not!
There are taxi ranks at CDG Airport outside Terminal 1 and Terminal 2 – and there are several in different places outside Terminal 2 – so you have lots of options. There’s information on the CDG website about where the taxi ranks are, roughly what you’ll pay depending on where you’re headed, and when the fares will be slightly higher. There’s also a list of the Paris taxi companies Charles de Gaulle Airport recognizes, which helps if you’re concerned about unofficial taxis.
>> More information about taking taxis from Charles de Gaulle into Paris is on the CDG website. 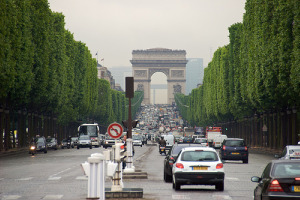 If you’re arriving at Charles de Gaulle Airport and the only stop on your holiday itinerary is Paris, then I highly recommend you skip the car entirely. If you’re flying into CDG and headed for points other than Paris, however, having a car may not be a bad idea. It really depends on where you’re going.
But if you are going to be driving your own wheels away from CDG, you’re in luck – the Charles de Gaulle Airport website has a page where you put in your destination address and it’ll tell you the best way to get there.
To drive into Paris (if you really must), you have a choice of which Autoroute to take – the A1 (Porte de la Chapelle) and the A3 (Porte de Bagnolet). Follow the signs directing you to Paris Centre. As you get closer to Paris, you’ll want to decide which direction to take on the circular ‘peripherique’ either to the east or west (the landmarks like the Champs Elysees or Arc de Triomphe will be most quickly reached by heading west and getting off at exit Port Maillot).
Porte de la Chapelle and Porte de Bagnolet bring you into the northern part of Paris which will bring you to the Montmartre neighborhood. If you’ve booked a hotel or hostel on the Left Bank, you’ll want to either cross through the center of Paris (if you’re feeling gutsy) or ask someone at your hotel or hostel for the closest exit off the ‘peripherique.’
Renting a Car at Charles de Gaulle Airport
There are loads of car rental companies at CDG, and one of the key things to note when you make a car rental reservation is where the rental desk is located in the airport. The Charles de Gaulle website has listings for all the companies and all of their locations, so you’ll be able to find the one that’s closest to where you come into the airport.
Note that some of the companies are set up so that you’ll take a shuttle to their lot which is quite a distance from the terminal. Also note that it’s not necessarily French rental car policy to leave the car with a full tank of gas for the next customer – so be sure to check before you drive off whether you’ve got a full or an empty tank. And if it’s on or near empty, ask about the closest gas stations before you leave the rental lot.
photos, top to bottom, by: optronic, hdaniel, MPD01605, abragad, Dolarz, tom.arthur