Getting from Paris to Zurich (and return) 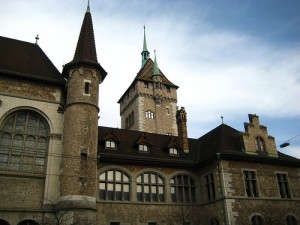 Zurich is the largest city in Switzerland , located in the north part of the country on Lake Zurich. Because it is a hub for both air travel and train travel, this is where most travelers arrive when they plan to visit Switzerland. Because of the city’s closeness to the mountain resorts, it is referred to as the “portal to the Alps”.
Regardless of you reason to travel to Zurich from Paris, you should know the means of transport to choose and how much it would cost.
Quick summary
When you need to travel between Paris and Zurich , you pretty much have a choice between flying (€40*) and taking the train. While the flight takes only 1h , you also need to consider the time (and money) spent getting to/from the airport.

Flights from Paris to Zurich

Zurich Airport (ZRH) , also know as Kloten Airport, is the largest international hub in Switzerland. It is for Edelweiss Air and Swiss International Air Lines.
Direct flights from Paris are run by Air France (CDG), Swiss (CDG) and Vueling Airlines (ORY). The flight time is 1h 5 min.
During the shoulder season (November 2011), expect to pay from €40 per person, one way on Vueling Airlines. In spring (March 2012), single fares also start at €40.
>>read more about Paris Airfare

Trains from Paris to Zurich

Trains to/from various cities in Europe arrive and leave from Hauptbahnhof, the main train station in Zurich. Direct trains from Paris Est depart at 6:24 a.m. every day and the single fares start at US$57 per person, one way. The travel time is 4h 36 min.

Buses from Paris to Zurich

The main bus station is located right by the main train station. There are plenty of connections to other European cities, including Paris, offered by Eurolines . Buses depart from Paris Gallieni Porte Bagnolet on Wed, Thu, Fri and Sun at 10 a.m. The travel time is 10 h 45 min. Single tickets start at €62.

Driving from Paris to Zurich

If you don’t mind driving for 600 km, then rent a car to get from Paris to Zurich. You should be able to get between the two cities in little over 6 h 30 min. Do consider making some stops along the way. Please note that you’ll be driving on toll roads.