Getting from Paris to the South of France 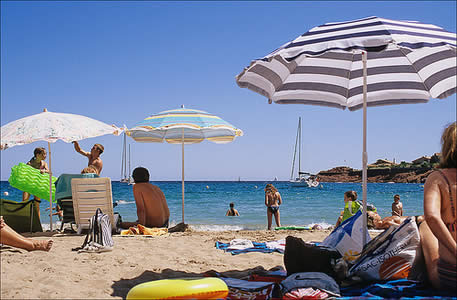 Once you’re in Paris, it’s hard to not feel the allure of the Mediterranean Sea and the French Riviera, or long to smell the lavender of Provence. Sure, it’s on completely the other side of the country, but it’s a heck of a lot closer when you’re already in Paris than when you’re back home again. So if you can swing it, a couple days in the South of France isn’t a bad idea.

While most people who are planning a trip from Paris to the South of France will automatically limit themselves to choosing between taking the train or renting a car, you’ll want to expand your search a bit beyond that. There are a couple relatively large airports in the region, so flying is something to consider. Yes, flights to France from outside the country may be easier to research than flights within France, but once you know the airlines to look for you can sometimes find really great deals on short flights.

>> More information about getting from Paris to Nice

>> More information about getting from Paris to Avignon

Flying from Paris to South of France 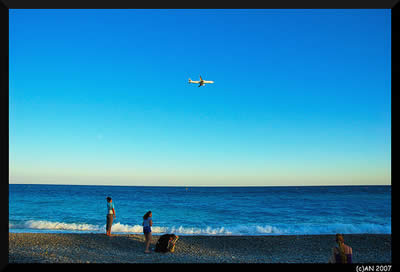 The airport in Nice (Cote d’Azur Airport, airport code NCE) is actually one of the busiest airports in France – third behind the two airports in Paris – so flying to this popular city on the French Riviera from Paris is really quite easy. The airport itself is right on the Promenade des Anglais, meaning that the beach in Nice isn’t a bad place to go plane-spotting! It’s about 4 miles from the city center, and the airlines serving Nice from Paris are Air France and easyJet.

France’s 5th busiest airport is in Marseilles (Marseilles Provence Airport, airport code MRS). The airport sits about 16 miles from the city itself, and the airlines which fly to Marseilles from Paris are Air France and Ryanair.

Flights from Paris to the South of France can cost as little as $115-180 round-trip in the low season, but can also run as high as $700. In the high season, a round-trip flight will run in the $280 range and will also go as high as $700. A one-way ticket in both cases will probably cost as much or more as a round-trip ticket, so even if you’re not returning to Paris it doesn’t necessarily make sense to buy a one-way ticket. Unless, of course, you happen to be visiting during one of the crazy-good sales that Europe’s budget airlines sometimes run. In other words, be sure to check the easyJet and Ryanair websites when you’re hunting for a cheap ticket between Paris and the South of France!

Taking the Train from Paris to the South of France 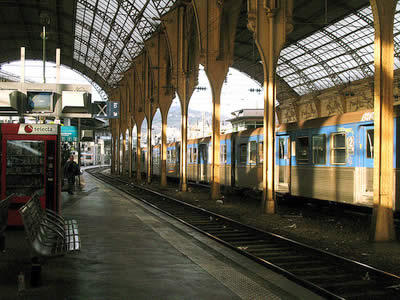 This is, by far, the most popular way to get around in most of Europe, and that’s true in France as well. Getting from Paris to the South of France by train is efficient and enjoyable, and it can be really affordable as well. Again, this article is going to focus on a few of the primary cities that you might be heading to in the South of France just to give you an idea of the time it’ll take you to get there, and roughly what it will cost.

To get from Paris to Nice by train, it will typically take a little over six hours of train time and another 15-20 minutes or so during the inevitable transfer in Lyon or Marseilles. If you get a direct TGV train, it’s 5.5 hours straight through. Second class tickets can range from $150-180 for a one-way journey, and first class starts in the $250 neighborhood (also for one-way).

From Paris to Marseilles by train is about 3.25 hours straight through if you get a direct TGV train. It’s roughly the same amount of train time in a trip where you’ll have to make a transfer as well, and transfers are generally in Aix en Provence. A one-way ticket in second class will cost about $130-135, and a first class ticket will cost $200-230.

The trip from Paris to Avignon is only about 2.5 hours on the train, and most of the trains you’ll find are straight shots with no transfers necessary. A one-way second class ticket starts between $115-130 and a first class ticket is in the $195-220 range.

Given the cost of an individual ticket for any of these trips, you might want to think about whether you’re going to be taking enough train journeys within France (or beyond France as well) to warrant getting a Eurail pass of some kind. There are passes that are just for French rail travel, and others which combine 2-3 countries, so there’s usually one that will suit your trip no matter where you’re going – provided you’re going to be taking enough train journeys to justify the cost. You can find out whether a Eurail pass will work for your particular trip by contacting a Eurail expert.

>> And you’ll probably want help figuring out the French train website. Trust me.

Taking the Bus from Paris to the South of France

In some countries, bus travel is common and easy. France is not generally one of those countries. There are regional bus companies which cover, say, the Normandy or Brittany region. There is also one company which will get you from Paris to other major cities in other countries (Eurolines). But unlike in other countries, there isn’t a national French bus company that will help you get between two cities in different regions – like Paris and Marseilles – easily.

Once you’re in a particular region, bus travel between cities isn’t too tough. Getting from Nice to Cannes by bus, for instance, is easy – but getting from Paris to Nice by bus is extremely difficult, if not impossible. Of course, one obvious reason for this is that the French train system is so good that the need for an intricate network of buses throughout the country isn’t there. Buses will only be required to connect small towns that don’t have good train service.

If you’re hunting for information about regional buses in France, be aware of a couple of words that will help you find what you’re looking for.

This website, which is in French, may help you find bus travel information – but generally speaking, if you’re traveling from one region of France to another, going by bus isn’t really a practical option.