Getting from Paris to Prague (and return) 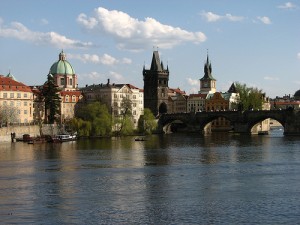 Prague is one of the largest cities in Central Europe and has recently emerged as one of the trendiest vacation destinations. Once a very cheap place to visit, in recent years Prague has become quite pricey, especially during the peak summer travel season and during the Christmas Markets.
Still, with careful planning you can get travel from Paris to Prague during the Christmas Markets and not pay a premium because of the time of the year when you travel.
Quick summary
The cheapest way to travel between the Paris and Prague is the bus. However, should you manage to book a flight at the right time (several months before departure), it’s possible to score cheap tickets, at rates comparable or lower than the bus ticket. Of course, you also need to consider the time and money spent to get to/from the airports.

Trains from Paris to Prague

Prague is well connected with the European rail network. However, there isn’t any direct route between Paris and Prague.
There are two sort routes (about 15 hours of travel):

Buses from Paris to Prague

The main station in Prague is Florenc, located east of the city center.
Eurolines connects most of the European cities, including Paris, to Prague. Buses depart Paris Gallieni Porte Bagnolet daily except on Tue, either at 2:15 p.m. (Sun, Wed, Fri) or 4 p.m. (Thu, Sat, Mon). Return fare starts at €92 and depends on your return date ; otherwise, single tickets cost from €64 per person, one way. The travel time is 10 hours.

Driving from Paris to Prague

Should you consider driving across three countries, then rent a car and enjoy a road trip in Europe. The total driving time between Paris and Prague is 1030 km and you should be able to cover it in 10 hours. Of course, considering the long distance, you should make some stops along the way.

View Larger Map
Note: * the price is valid at the time the article was written.
Photo credit