Getting from Paris to Frankfurt (and return) 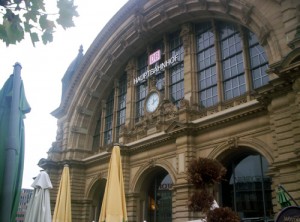 Europe is a small continent; which is definitely part of its charm, since you can easily travel across two or tree countries in a single day.
Paris is definitely one of the most romantic cities in Europe, but you might also want to get a taste of what Germany feels like. Frankfurt is an excellent choice for visitors , especially since it’s a major travel hub, allowing to travel further into Germany or other parts of Europe quite easily.
Quick summary
The cheapest way to get between Paris and Frankfurt is by bus (from €36* one way). You’ll be traveling during the night. Should you prefer to travel by day and see the views along the way, the train offers a good alternative (from US$89 one way, about 4 hours).
The short distance between the cities doesn’t require a plane ride, especially since there isn’t any low cost carrier which flies between the two cities.

Getting from Paris (airport code: CDG) to Frankfurt by plane

Frankfurt Airport (FRA) is the third busiest airport in Europe and is served by all major airlines. It is located about 12 km southwest of the city center. It is hub for Condor Flugdienst and Lufthansa, the German national carrier.
Direct flights from Paris are run by Air France (CDG) and Lufthansa (CDG). The flight time is 1h 20 min.
During the shoulder season (early December 2011), single non-stop airfare starts at €135 on Air France; while during the summer (June 2012), single non-stop airfare starts at €135 on Air France. When booking on regular carriers , it’s a good idea to book ahead of time. For example, if you were to get a ticket in mid-November 2011, the fare is up to €360 on the same carrier.
>>read more about Paris Airfare

Getting fro Paris to Frankfurt by train

Frankfurt is served by three main train stations: Hauptbahnhof (the main station), Südbahnhof (the South station) and Flughafen Fernbahnhof (the Airport).
Frankfurt Hauptbahnhof is one of the busiest and biggest train stations in Europe. There are direct trains from Paris , which depart from Gare de l’Est station. The travel time is about 4 hours. The TGV EST leaves Paris at 7:04 AM, 9:09 AM, 1:09 PM, 5:09 PM and 7:05 PM and the single fares start at US$89 (shoulder season).

Getting from Paris to Frankfurt by bus

Frankfurt is linked to the other European cities via various trans-European bus lines.
One option is Eurolines, which has the main terminus at Frankfurt Hauptbahnhof. There’s one departure per day from Paris , at 9:30 a.m. The travel time is 9 hours and the single promo fare is €36 (the regular single fare is €45). Prices do not change according to season.

Driving from Paris to Frankfurt

Another option is to rent a car and drive the 572 km between the two cities. You should be able to cover the distance in about 6 hours. Please note that you’ll be driving on toll roads.

View Larger Map
Note: * the prices are valid at the time the article was written
Photo credit