Getting from Paris to EuroDisney 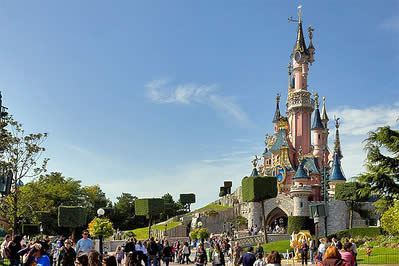 Although I admittedly will never understand why anyone would feel compelled to cross the Atlantic to visit EuroDisney, I also understand that there must be something awfully potent in that Disney magic dust that seems strong enough to allure millions of visitors each year to its park outside of Paris. If you are looking for a way to get from Paris to EuroDisney, here is a run-down on your transportation options:

Getting from Paris to Disney by Train 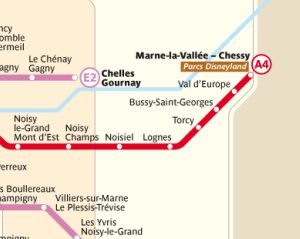 The easiest way to get from Paris to Disneyland Paris is to take public transportation. Not only is it super fast, convenient and cheap, it’ll also save you from having to deal with Paris traffic and parking costs at the gates.

Driving from Paris to EuroDisney

I would not recommend driving from Paris to Disneyland Paris. Not only do you run into a high risk of hitting Paris traffic and this trip taking you more twice as long as the train, but you’ll also have to pay for parking once you arrive. Ditch the car and take the RER! However, if are renting a car in France and insist on driving, here’s how:

Getting from the Airport to EuroDisney

You can take the high speed TGV directly from Charles de Gaule Airport to Disneyland Paris. Board the TGV headed towards Marne-la-Vallée. It should take you about 10 mins and costs €15.

There is a shuttle from both Orly and CDG to EuroDisney that costs €13 and takes about 45 mins.

If you are on a budget and have some extra time, you can also take the RER B to Paris (Chatelet les Halles) and then change to the RER A towards Marne-la-Vallée.

original photo at the top by Arjan Almekinders